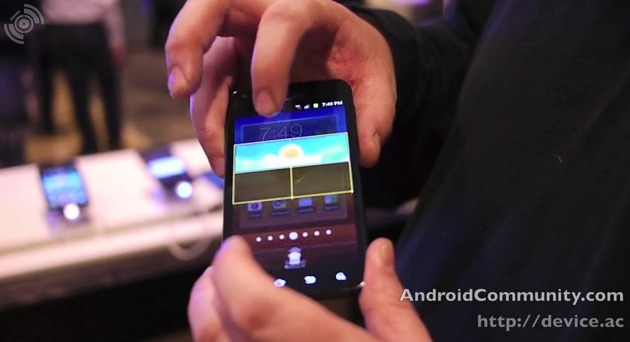 It’s always an great day when you run into Philip Berne, Samsung Telecommunications Marketing Manager, Technical Media, and columnist for our sister site SlashGear – this week we asked him to give us a special edition rundown of what we should expect from the Epic 4G Touch version of the Galaxy S II USA launch, and he of course gratefully provided us with nothing less than a super classy look at the device. You may remember our look at the international version of the Galaxy S II back at CTIA 2011 with Philip Berne as well – an internationally known set of videos that gave many their first look at one of the best selling Android devices in history. Join us for a cool hands-on demo video straight from the pro.

What you’re going to see is a set of features available not only on the Epic 4G Touch version of the device, but on said device is the demo we get, Phil showing us his own personal device straight out of his pocket. What you’ll see shown off is, first, a quick look at the size and shape of the device, a reminder of the fact that the Galaxy S II will be the thinnest “4G” device on each of the 3 carriers it’s going to be carried on, its 4.5-inch display (on this and the T-Mobile version) brilliant as always as it is the Super AMOLED Plus we know so well.

We get to see the new widgets drawer, resizability in all of the Samsung-specific widgets quite apparent and adhering to a lovely edge-to-edge grid, resizable to the max. On the back of the device you’ll find the 8-megapixel camera capable of 1080p video capture at High Profile – this meaning you’ve got low compression and extra high quality “close to what you’d expect to find on a Blu-Ray video”.

Berne reintroduces us to Samsung’s own Voice Talk powered by Lingo, this being a rather simple voice command system that here is demoed as working with a simple “Hi Galaxy” and a followup “Dial Han at work”. Of course Berne lets us know that Han [Solo] does not actually work with him at Samsung, we can only assume this is because Solo recently announced that he was, in fact, a fictional Science Fiction character. Berne lets us know that when you hook this device up to the official Car Dock (which you can see in our accessories rundown), you’ll be automatically opening Voice Talk for your hands-free convenience.

Kies Air is next, an app which Samsung devices are set to use to synchronize contacts and all manner of content via an automatically generated webpage that the app creates. This means you can move stuff back and forth between this device and any other device, be it another smartphone, a tablet, or your home PC, just so long as they have a web browser. Convenient!

Take a look at our other hands-on with this device courtesy of yours truly, and let us know if you’ll be picking up this version of the Galaxy S II, if you’ll be waiting for the AT&T or T-Mobile version, or if you’re thinking of waiting for whatever piece of magic Samsung releases next!