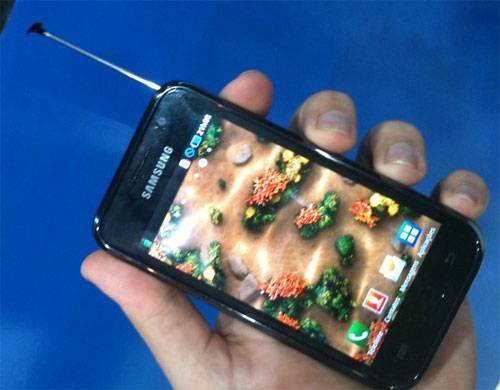 Another day, another announcement regarding a Galaxy S device. We’re not saying that we’re getting tired of seeing it — that’d be impossible with that screen — but it’s definitely getting kind of ridiculous. Samsung’s making sure to go to extreme lengths to make sure that everyone has the option of purchasing this device. That certainly won’t hurt Android’s numbers, that’s for sure. There’s a big difference with this device, though, which is a good thing.

The Samsung Galaxy S model (the i9000) that’s heading to Brazil is bringing along with it an ISDB-Tb Digital TV Tuner. Yep, embedded inside, and giving owners the ability to watch TV while they’re on the move. But, as for differences compared to the original Galaxy S, there aren’t any outside of the tuner. You still get the 4-inch Super AMOLED capacitive touchscreen, the 1GHz Hummingbird processor, Android 2.1, and Samsung’s proprietary TouchWiz 3.0 User Interface. You also get the ability to record video in 720p HD, it has a 3.5mm audio jack, GPS, Bluetooth, and WiFi.

One thing to mention? The price. Apparently, carriers down there don’t mind that you’re going to have to pay a small fortune to get this handset. Pricing is going to be about BRL2,399. Hopefully that changes before it launches some time this month. We’ve got our fingers crossed for our Brazilian readers out there.