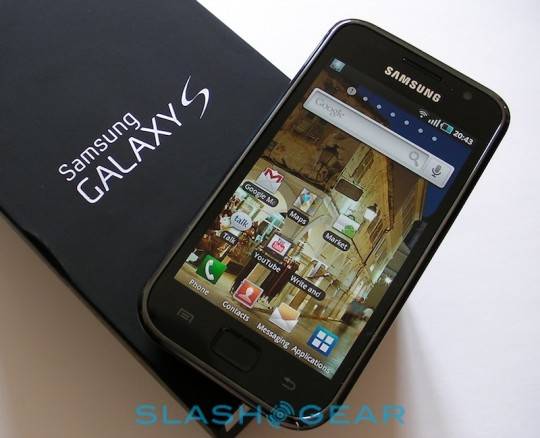 SlashGear gets to have all the fun. Okay, okay, maybe just this time around. Anyway, by now you’ve heard about the Samsung Galaxy S. At least a few times. And yes, even if you live under a rock. It’s Samsung’s second device to feature their luxurious Super AMOLED display, but it’s their first to do so with the Android Operating System tucked away underneath. And, thanks to the guys over at SlashGear, you get to find out whether or not you should be interested in the superphone from Samsung.

Features wise, what does the Galaxy S bring to the table? First and foremost, a 4-inch Super AMOLED capacitive touchscreen display with a resolution of 800 x 480. Capacitive touch buttons fall in line underneath the screen. You’ll also get your hands on 8GB of internal memory, which is partitioned to 2GB for application storage and 6GB for media storage. A 1GHz Cortex A8 Hummingbird application processor is tucked away inside, and a 5MP camera on the back that’s able to shoot video in 720p HD. As for the software, you’re looking at Android 2.1 with Samsung’s proprietary TouchWiz 3.0 User Interface in full implementation.

There’s plenty more to look at and read, so if you’ve been at all interested in getting your hands on the new device from Samsung, go take a read through it. In the mean time, check out the 720p video below.