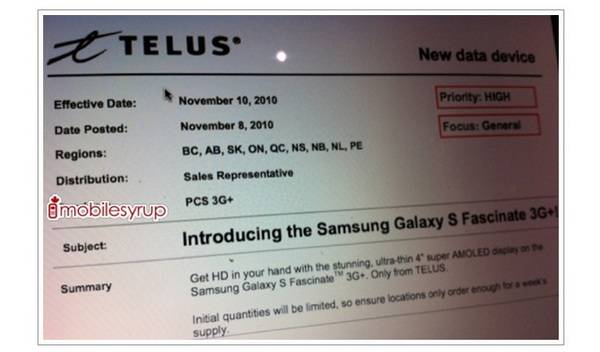 It looks like its official folks. The Samsung Fascinate, the Samsung Galaxy S phone specifically for Verizon, is heading to Telus in Canada. We heard about the device a lil while back coming to Telus, but nothing official. After hearing about the HTC Desire HD possibly going to Telus as well, it surprises me that that the Fascinate will also be going there. The device is set to be released on November 10th(this wednesday).

There will also be a launch event in Toronto for this device as well. The device will run on 3G+, which is normal on Telus.It will intially run Android OS 2.1, but will be upgraded to Android OS 2.2 during the winter. As for pricing details go, you can expect it to probably be around $149.99 on a three year contract or $529.99 with no contract commitments. According to the picture above initial quantities will be limited, so if your interested in the device get on it.