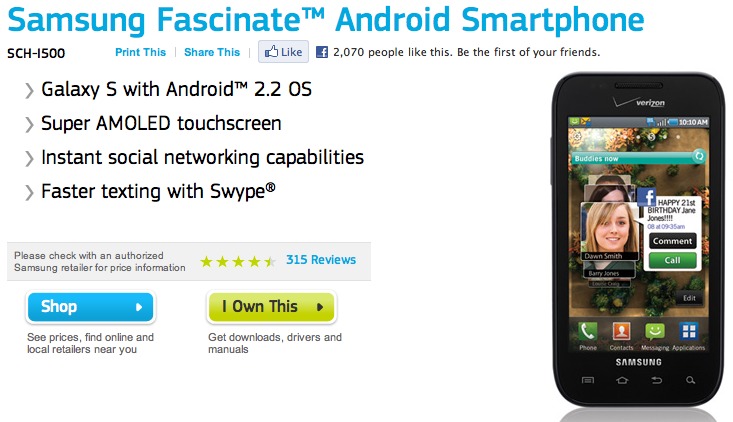 It wouldn’t be the first time, or even the second, that someone in control of a company’s website jumped the gun in one fashion or another. But, for Samsung, perhaps letting someone inform the world that devices like Sprint’s Samsung Epic 4G, and Verizon’s Samsung Fascinate as having Android 2.2 right now isn’t the smartest idea. That is, of course, unless you plan on updating those devices right now.

Some eagle-eyed tipsters managed to notice that Samsung has officially listed devices like the aforementioned handsets, plus the Samsung Vibrant on T-Mobile’s network, as having Android 2.2. Of course, if you have one of those handsets, you’ll no doubt already know that you don’t have that version of Google’s mobile Operating System. Not officially, anyway. But, you’re probably well aware that places like Europe, and even Canada, do indeed have those particular updates.

What’s strange, though, are the inconsistencies. For example, AT&T’s Galaxy S device, the Captivate, is listed as having Android 2.1. Additionally, the Samsung Fascinate which just launched on Verizon, is also listed as having only Android 2.1. Does that mean that these two handsets won’t be getting the update to 2.2? And, if that’s the case, why is that the case? Hopefully Samsung has something to announce to all the US-based owners of their devices, for each network, sooner than later.

[Update] Thanks to commenter, Doug, we’ve been told that Samsung has updated their product page site, and changed the devices back to 2.1. So, looks like someone did just make a mistake, and this isn’t a sign into the future. At least, not the foreseeable future, anyway. At least we know it’s coming eventually, right?