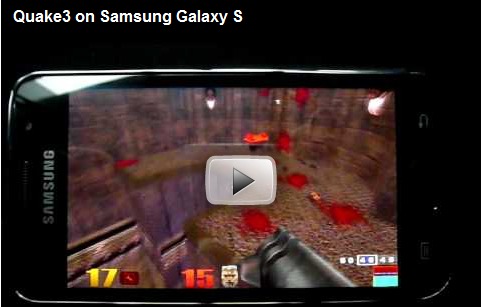 The Samsung Galaxy S, pitted against the first superphone (the Nexus One),has managed to come out on top. As you might recall, porting Quake 3 to devices has become a national past time for some developers out there, and now that the game has been given its paces through Samsung’s own super-device, the results are quite revealing. According to Android Police, the Nexus One can only render 22 million triangles per second, while the Galaxy S can render a staggering 90 million triangle per second.

However, all the technical speak is great for those who are interested in that, but for the “average” consumer, none of those numbers are going to mean anything. At least, not this year. But, as you can see from the videos alone, the Nexus One just pales in comparison to the colors, as well as the fluidity of the ported title running on the Galaxy S. But, now that both devices carry it, new benchmarks can be found and tested against one another.

Samsung Galaxy seems to be the best Android device in gaming right now, but we know the landscape of smartphones/superphones is ever-changing, and the Galaxy S probably won’t hold its mantle for much longer. But, being kind of the hill for any amount of time is still great. You’re still king. But, just because it can play a game better than the Nexus One, we’re sure there’s still plenty of folks out there who would choose the phone from Google’s Phone Store, rather than the 4-inch Super AMOLED display packing, TouchWiz 3.0 User Interface boasting Galaxy S. Just a hunch, though.