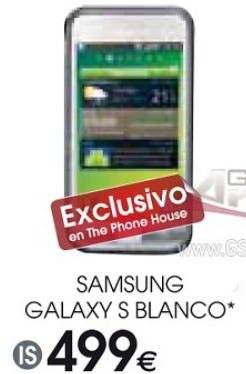 Through all the variations of the Samsung Galaxy S out there, there haven’t been any that have moved away from the plain black/chrome color scheme. While that’s not necessarily boring or anything, we can safely say that there’s plenty of options out there, without much coming in the way of colors. And, we love our options. That’s why we’re so excited to hear that the Samsung Galaxy S comes in white, too.

Though, there’s obviously a catch to the whole thing. The Phone House, over there in Spain, is apparently getting their hands on the white version, and there’s no word that they plan on selling it anywhere other than Spain. But, that’s not saying it won’t happen. There will probably be wireless carriers in Europe that pick up the new version, but the chances of it showing up here in the States is pretty small. Especially considering the other models have already launched. Though, Verizon, that does give you some wiggle room here.