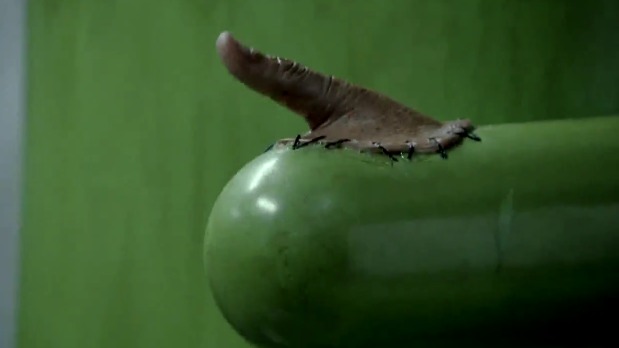 If you’ll recall a few days ago we showed you a severely disturbing ad spot from Sony Ericsson depicting a man running through some dark streets, past dingy workers in a rush to deliver something or other to what turns out to be a man performing surgery. The surgeon is hard at work doing no less than grafting human thumbs onto a 3 foot tall Google Android. This commercial was leaked in a terrible quality video, then replayed during the Superbowl, and is now here for you in full quality, in a totally extended video that’ll creep you out just as hard as it did in the short mix.

The thumbs of a human give an Android the ability to use the XPERIA Play. I’m sure whatever cadaver the surgeon stole the thumbs from wasn’t going to use them, and the Android seems pretty happy at the end of the spot, his antenna flipping back and forth with glee. This video reminds me of an art/music video featuring Daft Punk entitled ELECTROMA. In this video, the two robot DJs are living in a world where everyone has either one of their helmets or the other. Partway through the video, Daft Punk are given human faces made of clay.

In a display just as gruesome, Sony Ericsson has turned Android into a functional human as well, able to play games as it never has been able to before. Now let’s rip those thumbs off, get this metaphor out of the way, and start playing some Mortal Kombat and Tony Hawk. Check out the full commercial here:

And don’t forget to stick around for the part where the Android exits out into the street, as you’ll be able to see a lovely site: a live action Android floating above the ground. Just like a landspeeder!