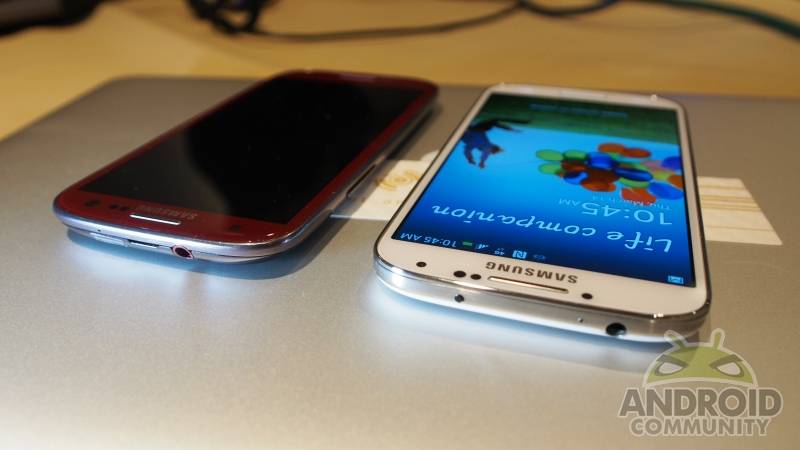 Samsung has shared their new smartphone and all its software aspirations with the world, and this is the first thing that came to mind. Yup, you knew this was coming now that the quite similar Samsung GALAXY S 4 has been announced and shares some resemblance to the older and smaller brother. While the look and feel is largely unchanged, the hardware under the hood and software under the skin is what’s new. Lets take a look.

It’s all about comparisons here folks. You already have the Galaxy S III and you’re wondering if you should upgrade, or you know the S III will be getting a price drop (eventually) once the 4 arrives – what do you do? It’s a hard choice out there for a tech lover. Not to mention all the other devices available. While we know many of you probably already know everything that’s different, but for those that would like it spelled out check out the specs and video below.

So now you’ve seen the specs, you’ve watched a quick video, so what about software and features? We have those too! The Galaxy S III is currently running on Android 4.1.2 for most of the users, with a few leaks of 4.2 in the wild. It has the Premium Suite update with many new features, but nothing compared to the new Galaxy S 4. The GS4 is running the absolute latest Android 4.2.2 from Google, and is loaded with all sorts of goodness. From Hover features like the Note II, Eye tracking (which probably won’t arrive in the GSIII) Airview, S Health and much much more.

We expect plenty of the new features to arrive eventually in software updates from the respective GS III carriers, but some will probably be exclusive to the new GALAXY S 4. For an idea of everything the new device has to offer hit the timeline of links below. So what do you think, we’d love to know. Enough of a change and new features? Or too similar? That HTC One is looking pretty unique and different right about now.