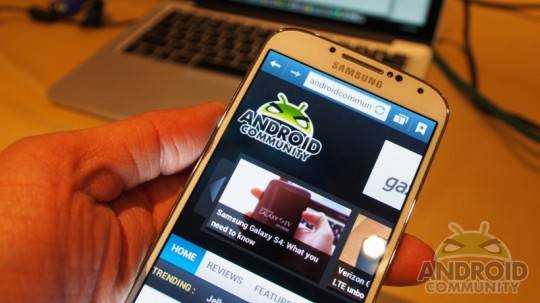 While we wait for the official word from the carriers, it looks like one retailer has given a rough idea of when we can expect the GALAXY S 4 to begin arriving for sale here in the US market. That retailer is Staples and a recently leaked memo is giving a potential release date for AT&T, T-Mobile and Verizon Wireless. Take note though, we say potential because the memo makes it clear that these are “tentative” launch dates.

That warning out of the way, lets get to the important part. The memo has AT&T coming first on April 26 with T-Mobile and Verizon Wireless following on May 1 and May 30 respectively. Assuming these dates hold accurate, it looks like Verizon customers still have a decent wait ahead of themselves.

Other details from the memo have the in-store signage going up on April 15. Coincidentally, that is a day earlier than the carrier pre-orders are expected to begin. As far as Staples goes, this memo also makes mention that customers will have a chance to reserve the handset. It looks like the GALAXY S 4 reservations will be available with 500 Staples locations, however they are also not offering any guarantee of inventory for the launch dates. 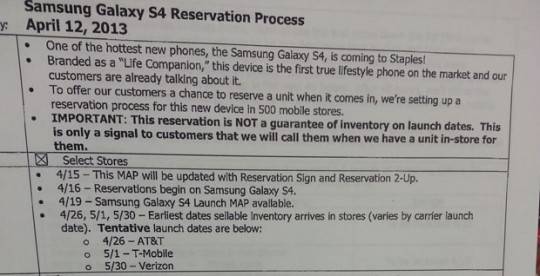 All said and done, things seem to be shaping up for some upcoming GALAXY S 4 launches, but as always it will be much nicer when we get these sort of details directly and officially from the respective carriers. With that in mind, if you are considering a GALAXY S 4, you may benefit from hitting up some of our previous coverage. For that you can use this link of follow the Story Timeline below.