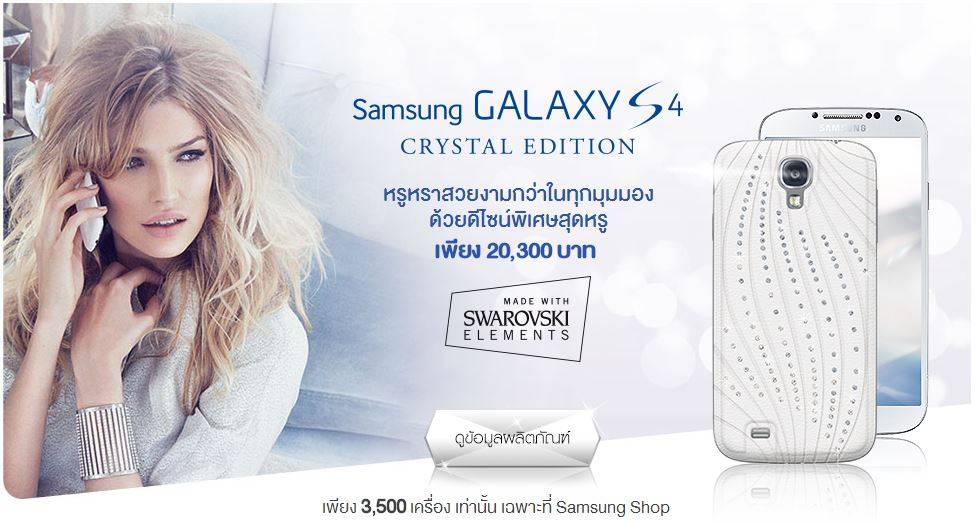 Samsung is no stranger to rolling out different versions and even limited edition models. And to that point, they have recently unveiled the latest Galaxy S 4 variant. The model is the Galaxy S 4 Crystal Edition and it will be a limited run of 3,500 units. Those crystals are real and taking the limited edition a bit further, the availability will be limited to one market.

The Galaxy S 4 Crystal Edition will be sold in Thailand. The crystals will be from Swarovski and otherwise, this model Galaxy S 4 will be the same as the I9500 international version. Or in other words, the model powered by the Exynos processor. Other specs include the 5-inch 1080p display and 13 megapixel rear-facing camera.

The overall size and shape of the handset remains the same. The crystals will be on the back of the handset, which also sports a faux-leather cover, which appears to be similar to that of the Galaxy Note 3. While limited in available units, it doesn’t appear this model will be super expensive as compared to the regular model Galaxy S 4.

Details coming from SamMobile show the Crystal Edition priced at 20,300 baht, which is roughly $630 in terms of US dollars. In comparison, the regular model Galaxy S 4 is selling for 17,400 baht, which translates to roughly $540. We aren’t sure how quickly these will be snapped up, but given they are a limited 3,500 unit run and in only one market — we are fairly certain you will not be seeing these in the wild all that often, if ever.