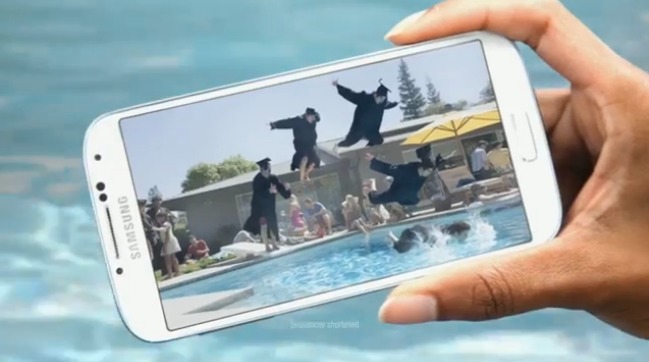 Samsung is back with those ads we all seem to either love or hate, showing off their latest smartphone the GALAXY S 4. In their latest ad airing during the NBA playoffs called “Pool Party” you’ll get to see many of those new features that make the GALAXY S 4 stand out against the competition. Then, what kind of Samsung commercial would it be without poking fun at Apple. Take a peek below.

As expected, Samsung is already blasting their new smartphone on social media and TV across the nation, and we’re only going to see more of it as the weeks and months pass. Samsung does a pretty good job at TV advertising, even if their launch events are extremely cheesy.

The ad shows off a few of the many new features being delivered with their new smartphone. Things like air gesture controls for answering the phone, their dual-shot camera mode, IR-blaster for controlling the TV and much much more. It’s pretty nifty, shows that they have plenty of cash being spent on adverts, and is actually pretty funny. Here it is:

As usual, Samsung’s aiming right at Apple and poking fun at all those iPhone users. Going as far as to say not all smartphones are as smart as each other. Having owners questioning their decision about getting an iPhone and more. Then of course teases the iPhone for not having NFC for S-Beam photo sharing. Yup, we knew that was coming. I have a feeling this is just one of many new commercials we’ll be seeing soon, and we’ll be sure to post the good and the bad right here.

Do you like the approach of them always knocking their competition? Don’t forget to check out our GALAXY S 4 Review.