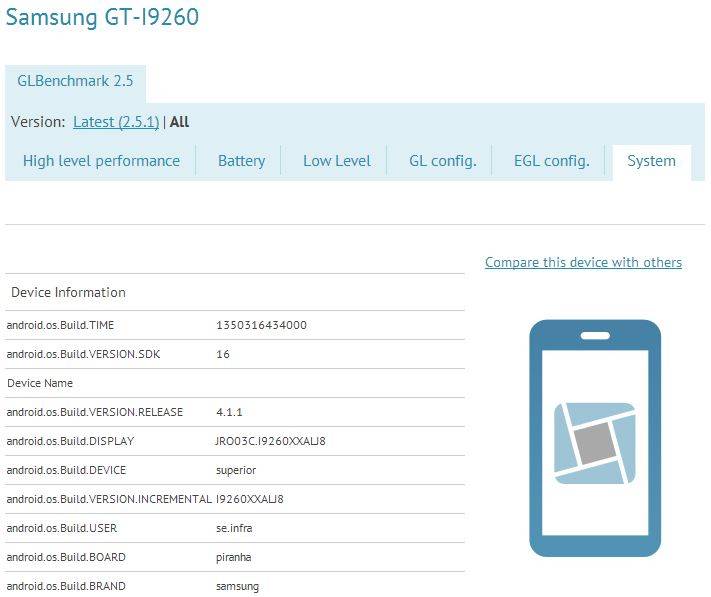 The GLBenchmark listins makes multiple references to the name “Superio,r” which suggests that will be the name of the GT-i9260 once Samsung officially announces it. Perhaps we’re looking at the results for the Samsung Galaxy Superior? That could very well be the case, and it’s worth pointing out that this handset was called the “Superior” back when it was rumored to be the next Nexus device.

Aside from the name, the GLBenchmark results also give us some additional information, showing that the GT-i9260 uses a PowerVR SGX 544 GPU. When that press shot released two weeks ago, it was accompanied by all sorts of specifications, telling us that the GT-i9260 will use a 1.5GHz dual-core ARM Cortex-A9 CPU and 1GB of RAM. This GLBenchmark test also confirms that the display will be running at 1280×720 resolution and will be packing Android 4.1 Jelly Bean out of the box.

The Galaxy Superior (or whatever it will be called) sounds like a pretty decent phone, so now all we need is an announcement and we’ll be set. There’s no telling when Samsung will drop official word of the GT-i9260 either, so we’ll just have to keep an ear to the ground and hope to hear more soon. Keep it tuned here to Android Community for more information, as we’ll update you if new details surface!