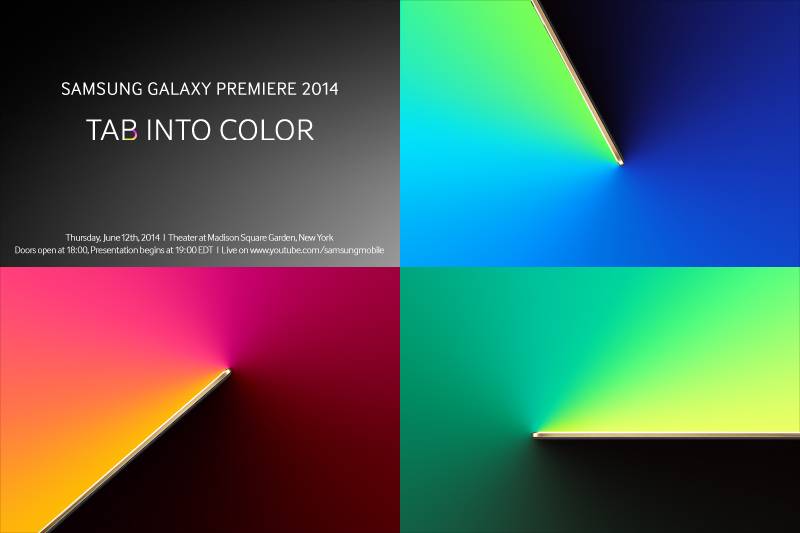 Samsung has just let the world know that it will have a big reveal scheduled on June 12. And judging by the wording used for the Samsung Galaxy Premiere 2014 invite, we could be expecting some colorful devices.

One can hardly say that Samsung is overdue in delivering a new tablet, but it is somewhat due another Premiere event. Around this time last year, the Korean company unveiled a series of products, including the family of Galaxy S4 devices such as the Active, Mini, and Zoom along with some Windows laptop. So it isn’t surprising that Samsung will be scheduling another Premiere media event soon, but there is going to be a bit of a difference.

Two keywords here: “Galaxy” and “Tab”. This pretty much says that this will be an Android-centric event. And more specifically, it will be a tablet-centric one. Unless Samsung has suddenly chosen to redefine what “Tab” means in its lineup. At this point, the only real mystery left to solve is “Color”. It could simply be a line of tablets available in different colors, though admittedly that is somewhat unexciting. It could also be about displays with better color management and accuracy. It could very well be the Galaxy Tab S that is currently being rumored to sport an 10.5-inch AMOLED screen.

If you are in any way curious what Samsung has in store, mark June 12 on your calendars. The presentation itself will begin 7 PM EDT and Samsung will be live streaming it form their YouTube channel.