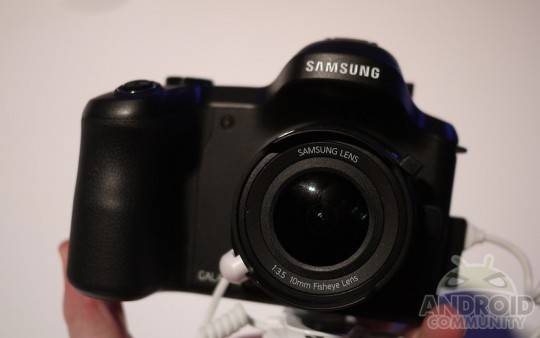 We got an early look at the UK pricing for the Samsung Galaxy NX camera when product listings appeared with a few retailers back towards the end of July. Since then talk of the camera had gone quiet, but in a bit of good news for those who may have been waiting — the Galaxy NX is now shipping in the UK. So far listings have appeared with four retailers however we expect that list will grow with time.

For now those listings can be found with Jessops, Currys, PC World and Wex. All four have the camera listed at £1,299. Time will tell how well received the Galaxy NX will be once it begins appearing in more users hands, however it is hard to ignore that price tag. For that you are getting a camera that takes a big step up from the Samsung Galaxy Camera. In fact, you will be getting something that was designed to compete with other DSLR models.

The Galaxy NX is the first-ever Android camera to ship with an interchangeable lens setup and in this case those making the purchase can expect an 18-55mm lens to begin. The camera also touts a 20.3 megapixel APS-C sensor, 16GB of internal storage space and a memory card slot with WiFi and 4G LTE for connectivity.

The camera is powered by a quad-core 1.6GHz processor paired with 2GB of RAM and is running Android 4.2 Jelly Bean. There is also a 4.8-inch touchscreen display. In terms of performance, Samsung has previously said the Galaxy NX will be capable of shooting at 8.6 frames per second with a shutter speed of 1/6000.

That all being said, it should be interesting to see which type of user will adopt this model. If nothing else, it certainly sounds like a good entry for the Android lover that had been wanting to move into owning a camera with fancier features and an interchangeable lens setup. Those looking for more should venture down into the Timeline below which includes an earlier hands-on.