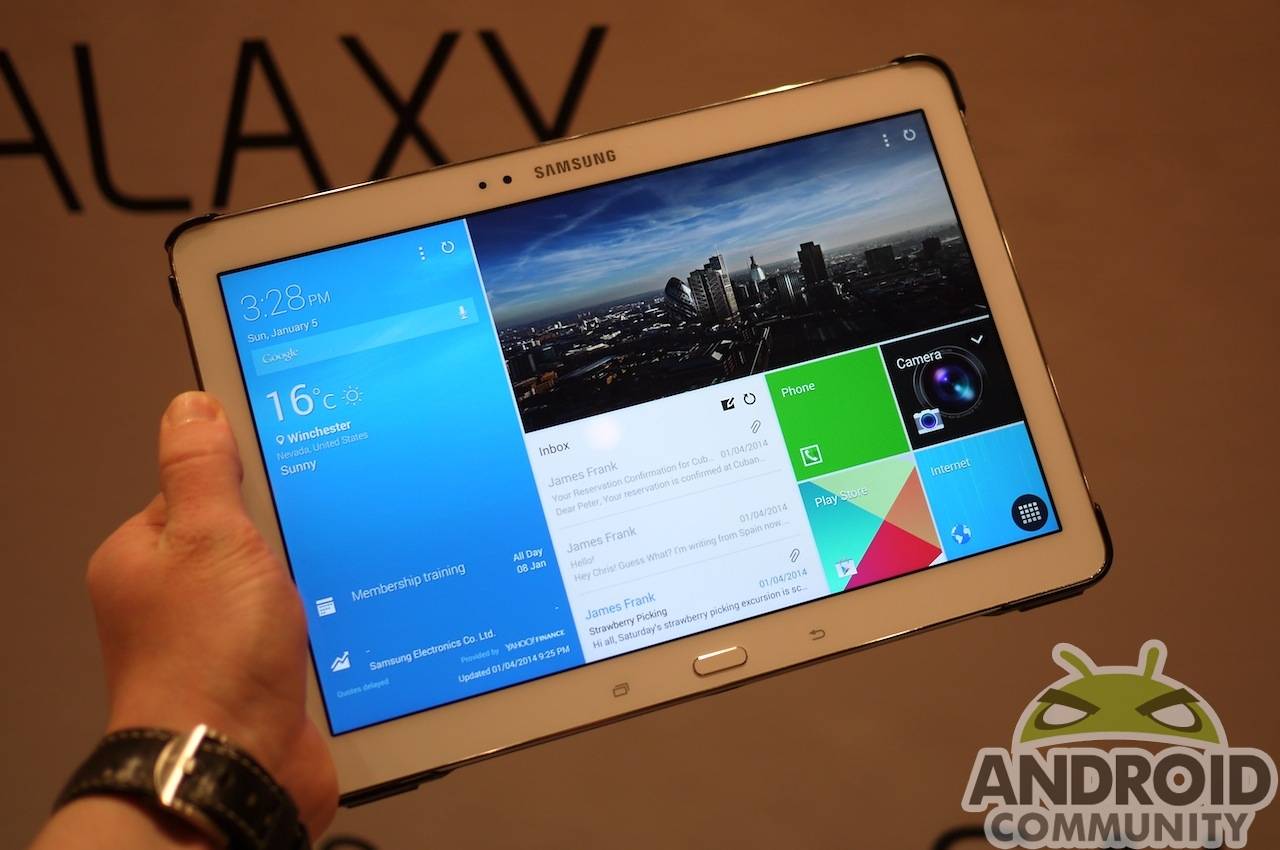 It’s time that Android tablets got serious. That’s Samsung’s argument here at CES 2014, and the tablet it expects to convince us with is the Galaxy NotePRO. As the “Note” branding suggests, this is an S Pen equipped slate similar to the Note 10.1 and Note 3 of 2013, but the PRO nomenclature signifies what Samsung argues is a real step up in productivity: a tablet that’s just as much at home creating content as it is consuming it. We stopped by for some hands-on time ahead of the Galaxy NotePRO’s launch; read on for some first-impressions.

The big thing you notice about the NotePRO is, well, how big it is. Samsung has opted for a 12.2-inch Super Clear LCD display running at a whopping 2560 x 1600 resolution, and it’s a very impressive panel indeed. Viewing angles are broad, and the digitizer is responsive when you whip out the S Pen from its silo (triggering the Air Command menu we saw on last year’s Note range, too). 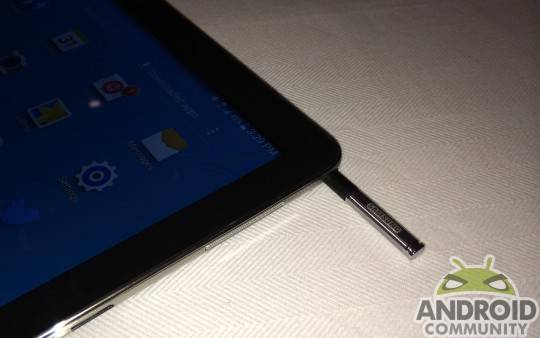 The downside to that is bulk and weight. The NotePRO measures in at 295.6 x 204 x 7.95 mm and 753g for the LTE version (the WiFi-only shaves 3g off): combined, they add up to a tablet that we were more comfortable resting on a table or our lap than holding up. This isn’t the slate for power-users who want to work when they’re physically on the move, unless you cradle it in your arm like a clipboard.

Still, you get some power to go with that heft. The NotePRO uses either Samsung’s own Exynos 5 Octa for the WiFi and 3G models, or Qualcomm’s Snapdragon 800 2.3GHz quadcore for the LTE model, paired with 3GB of memory and either 32GB or 64GB of storage. A microSD card slot is there to augment that. Connectivity includes WiFi a/b/g/n/ac (2.4/5GHz), Bluetooth 4.0, and USB 3.0, while there’s the full array of sensors: GPS, GLONASS, accelerometer, digital compass, gyroscope, infrared, and RGB.

Samsung also fits a 9,500 mAh battery into the leather-effect backed slate, though isn’t saying how long that’s expected to last given the big, bright display. The company will offer a Bluetooth keyboard and a Bluetooth mouse for those who want them, though there’s a new onscreen keyboard which now has things like Ctrl keys for copying and pasting, and arrow buttons for navigating through documents, all with haptic feedback. There’s also an ethernet dongle for traditional connections, as well as various cases both plain and with designer collaborations. 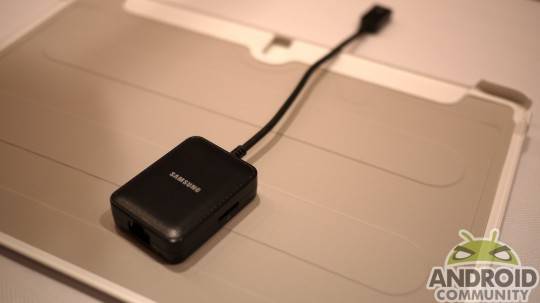 The new keyboard isn’t the only software enhancement Samsung has made, and in fact the key part of the NotePRO is really the apps it runs. It starts from the homescreen, now clad in Samsung’s new Magazine UX layout (though you can optionally still have a traditional Android homescreen too). That consists of up to five panes of different sized widgets – Samsung preconfigures it as personal, workspace, and social, complete with a mixture of recently used apps, calendar, inbox, gallery, Google+, and other blocks – which can be reorganized and shuffled to create a dynamically-updating window into your online world whenever you turn the tablet on. 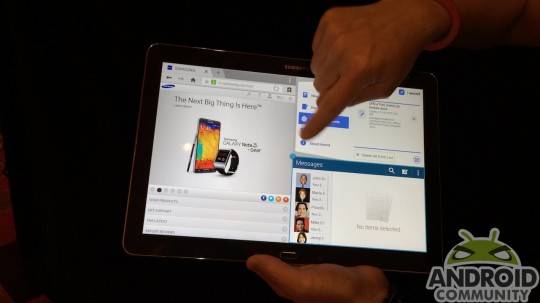 It’s an aesthetic improvement over TouchWiz, though it’s still early days for Magazine UX. For a start there’s a limited number of widgets – we spotted Google+ but no LinkedIn – and those that are there have some shortcomings, like the email inbox only supporting Samsung’s own app, not Google’s Gmail app. 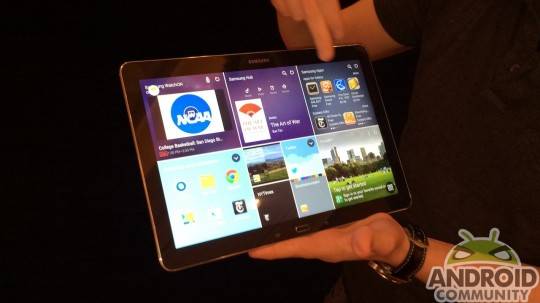 Swipe in from the right edge, meanwhile, and you get to the quick app launcher: a tap opens up each app as a floating, resizable window (that can be maximized for full-screen) with Samsung telling us there’s feasibly no limit to how many apps you can open that way. Long-press and drag, meanwhile, and you can pull up to four apps out to share the display in what Samsung calls Multi Window. Dragging a blue dot in the center point resizes each of the four windows; you can also now have up to four of the same app on-screen (such as the browser, or two versions of a Word document) for comparison working. 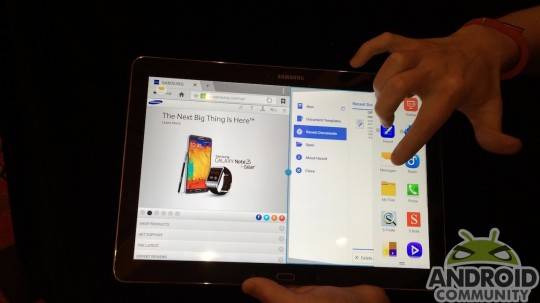 Samsung is preloading or offering for download what it claims are up to $700 worth of apps and services, including things like subscriptions to Evernote Pro, Cisco WebEx Meetings (along with its own Samsung e-Meeting app which turns two or more of the NotePRO into an impromptu collaborative workspace).

We’re reserving judgement until we see quite whether the supposed cohort of “people who want to do more productive things with their tablet” Samsung says is out there turns up at cash registers to actually buy the Galaxy NotePRO. That will undoubtedly depend on how Samsung prices it when it begins its global roll-out later in Q1 2014.