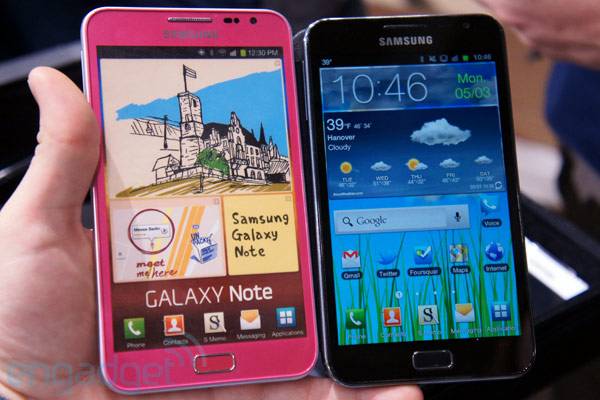 The Samsung Galaxy Note is quite popular right now, especially now that AT&T has launched their own 4G LTE version of the 5.3″ phablet device. Before launching on AT&T we saw some leaked renders of a Note dressed up in Pink and heard it was coming soon. Today at CeBIT Samsung has confirmed that rumor and the folks at Engadget received some hands-on with the all new Pink Galaxy Note.

The Pink Galaxy Note is obviously aimed at the female crowd but I have a feeling a few guys would love to rock out with the pink version too. With the same textured rear cover as the blue version on AT&T it sure looks nice. Over in Germany at the Annual CeBIT show Samsung has unveiled it although they’re still being light on details regarding a release date.

Apparently all we are hearing is that it should be available before May — so within the next few months. Would have been perfect for Valentines Day but too late now. The specs will all remain the same with that awesome 5.3″ display and S-Pen for all the writing and drawing one would ever need. Most likely it will only launch dressed in Pink in European countries and the international version but you never know, AT&T might just steal the idea. Check out our full review below if the Note still interests you.