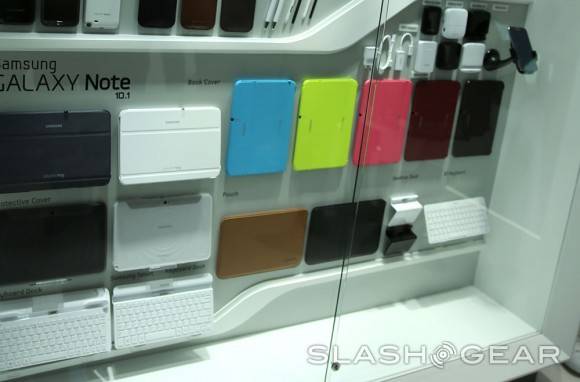 That’s especially true for flip covers. The flip covers made for the Galaxy Note II’s larger screen come in a variety of different colors, ranging from vibrant blues, pinks, and yellows, to darker tones like black, mustard yellow, and red. Naturally, there’s a white one available too if you want to stick with the color scheme of the Galaxy Note II. These flip covers replace the battery cover on the backside of the phone, and come attached to another cover you can flip over the side to protect the front screen.

Also seen in the images are a collection of pouches you can store the Galaxy Note II in where you aren’t using it, along with a number of protective cases. These cases protect the sides of the device with a bumper, meaning that accidentally dropping your Galaxy Note II doesn’t necessarily have to mean the end of the road for your expensive handset. A collection of vehicle docks can be seen in the images, as can a group of S Pens of varying size – perfect for those who need a replacement or find the S Pen the Galaxy Note II comes packed with to be too uncomfortable to use. 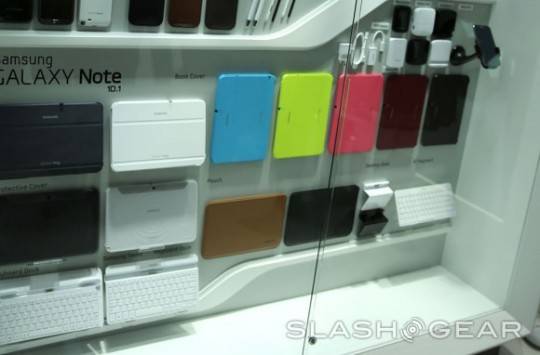 We also catch a glimpse of some protective covers and book covers for the Galaxy Note II, and finally, a number of keyboard docks are on display as well. There isn’t any release date or pricing information for this line up of accessories yet, but we can probably expect them to launch around the same time as the device itself. We’ll have that information for you once Samsung spills the details, so keep it tuned here to Android Community!