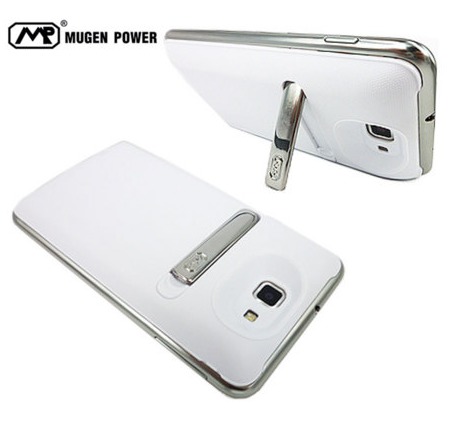 With the Samsung Galaxy Note being in the news as of late, possibly headed to the US and getting ports of Android 4.0 Ice Cream Sandwich or CM9 already I figure I’d let everyone know about an awesome accessory and extended battery for the smartphone tablet hybrid. From Mugen Power we have the 4500 mAh extended battery — awesome right?

When the Galaxy Note was announced having a 1.4 GHz dual-core processor and a huge 5.3″ screen I know many were worried about battery life — myself included. Samsung assured everyone they had that covered and indeed they do. Offering the Galaxy Note with a huge 2500 mAh battery that should last all day for most users.

For those that want to watch movies, draw portraits with the S-pen stylus technology or just love using that brilliant and bright 5.3″ Super AMOLED HD display all day long we have you covered. Mugen Power is offering a massive 4500 mAh extended battery for the Note — with a replacement battery cover and built-in kickstand. Now you can watch movies on that huge screen hands-free, and it will last for more than a few hours too. It adds to the thickness obviously, but not too much if you ask me.

If you’ve not heard of Mugen Power don’t worry because we have and they are great. This isn’t some cheap knockoff claiming 4500 mAh — this battery should give you a massive boost in battery life. It does come at a pretty penny and definitely isn’t cheap. Being offered in white, black, and red for a price of $109. If you truly need that much battery life head down to the link below and get your own today — shipping in a few weeks.