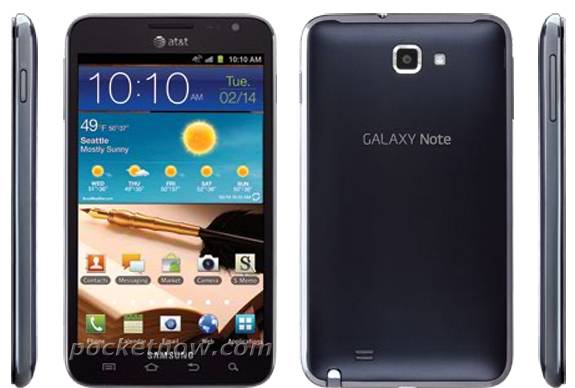 While we’ve heard a few reports and seen some FCC filings suggesting AT&T was in the final stages of their Galaxy Note launch nothing has been made official other than a few leaked renderings of the device. After yesterdays leak by Anymode (that was quickly denied) we now have full press images showing the AT&T branded Galaxy Note in all its glory.

With all the CES announcements flying around we received the accessory maker known as Anymode’s full list for CES including the official accessories for AT&T’s Samsung Galaxy Note — coming “early 2012” but early this morning they isued this statement.

After seeing that response our friends from PocketNow were able to secure the full press images you see above. Obviously Anymode seems to be backtracking here to protect themselves but if we weren’t sure the Galaxy Note was headed to the US on AT&T before — we are pretty sure now. Most likely all of the official details and information will be released at CES this coming week and we’ll be there live to get it all.

If you thought the Galaxy Nexus and its 4.65″ screen was too big, or have been waiting for it to hit AT&T then you might just want to take a second look at the Samsung Galaxy Note. All the details on the Note including our hands-on pictures and video is available below. Stay tuned for all the CES coverage from Android Community.

Note: The image shows 2/14 on the weather widget — this could be a sign we’ll be seeing the Galaxy Note launch for AT&T mid February.