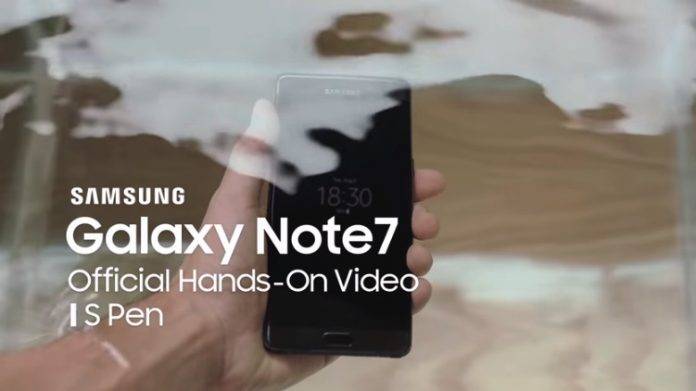 We’re excited to see what the Galaxy Note 7 really can do. As you know, Samsung decided to launch the first non-flat Note. Aside from skipping Note 6, the company also surprised us by not introducing another model. We were hoping for the Note 7 edge but nothing at all, just the Note 7 that comes with a curved edge screen. We understand that there is no need because the Note 7 is enough but we want to know how this will fare against the competition. Well, there’s no rival yet since Apple hasn’t rolled out a new iPhone yet for this year.

Yesterday, we saw an official hands-on video by Samsung and here’s another one focusing on the S-Pen. Watch below and see how the South Korean company made the stylus better than ever:

The S-Pen is waterproof but really, why would you need a waterproof stylus? It’s plain and simple: so you can use it by the pool, in the pool, or just about anytime and anywhere. You can use it anytime as it’s ready to resist water. The updated S-Pen is also said to be more intelligent and more precise. You don’t have to charge the S-Pen so you can continue to enjoy interacting with the phone.

The enhanced S-Pen has been cut and engineered like a real pencil as presented in the video. It now offers better control plus it’s more sensitive. The S-Pen can also be used on the Always On display so you can quickly jot down notes without having to fully unlock and open the smartphone.

The S-Pen allows an easy GIF maker and as we mentioned before, you can see changes in the text with the zoom and magnify feature. There’s ‘Translate’ that allows you to hover and instantly translate words or phrases from one language to another.