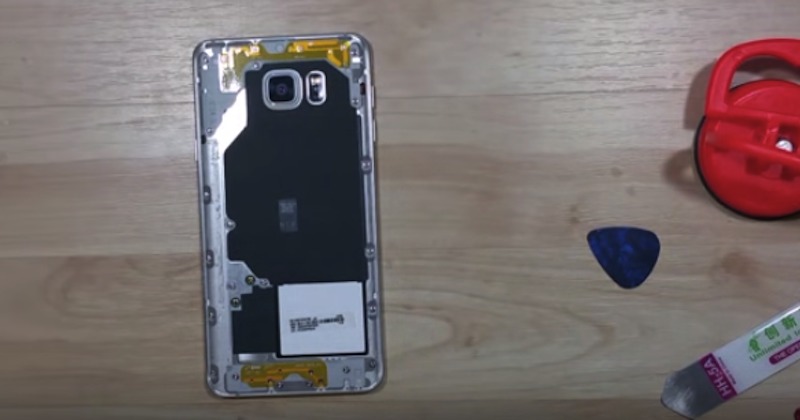 Aside from drop tests, we’re not fans of disassembling gadgets because they can be painful too watch. But you know, there are people who won’t mind wasting a device or two for the sake of knowing how robust a phone is. After a series of drop tests, we learned that the Note 5 is better than the Galaxy S6 when it comes to surviving such stress tests. It’s a well-built phone but you still need a protective case so it won’t be easily damaged when dropped.

How2Tech on YouTube is popular for posting informative videos on how to fix devices, as well as, disassembly videos. This time, he wanted to pry open and see how well-made the Galaxy Note 5 is. Using a suction cup, nylon spudger, small philips screwdriver, iSesamo opening tool, and other opening tools like guitar picks and playing cards, and of course, a heat gun, How2Tech was able to open the phone but not without any challenge.

The phone was harder to open compared to last year’s Note 4 which was rumored that it’s easy to insert a thin card on the LCD screen. This new Note 5 was hard to open but the heat gun helped to pop open the back cover. It took the guy some time to open the phone but it finally opened after about halfway through the 21-minute long video.

Before heating up the sides of the phone, the sim card tray was popped out first and then stylus was removed. Phone was then turned off. Heat was applied on the back, side parts with the iSesamo tool, playing cards, and guitar picks all helping to open the well-built phone. All four corners were then pulled up and opened to reveal the inside of the phone. About twenty screws were sighted and then unscrewed to reveal some more parts. Using a small tweezer, the screws were removed carefully again, after some time because there are too many of them.

The “disassembler” said removing parts and repairing the phone can be a bit tricky. The layout of the parts are similar to most Galaxy devices. He went out to pull whatever modules he could take out, prying his way around the battery…slowly and carefully.

This disassembly video would only matter to geeks who are interested in the insides and how they could probably hack, mod, or customize a unit but not to us ordinary geeks who only want the latest and most powerful gadgets all the time.

Watch the full disassembly video below: