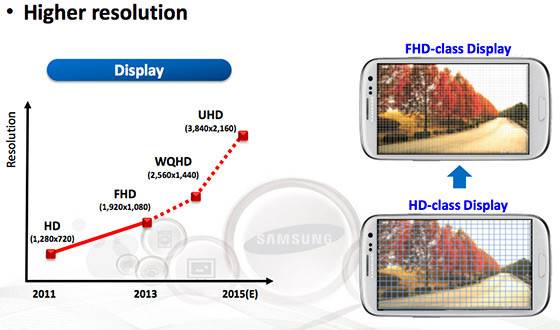 It will still be months until we hear whether or not there will be a Samsung Galaxy Note 5 this year (or whether there will actually be a gadget with that name) and yet the rumor mill has already started working. Previous presentations in the past few days may have confirmed that the OEM is coming up with a high pixel density device sometime this year, and now they’re speculating that this might arrive with their upcoming phablet.

In the past Analyst Days presentation, Samsung admitted that they are planning an Ultra HD 2160 x 3840 pixels Super AMOLED displays for mobile and that it might come out this 2015. They hinted at this too during the Semiconductor and Display Technology Roadmap workshop last year, saying that they were planning to release smartphones with higher-resolution UHD. Now some are saying that these UHD Super AMOLED panels will be displayed to its full capacity in the Samsung Galaxy Note 5.

If this is true, then the phablet will become the highest pixel density ever put in a smartphone. The Note 5 is expected to have a 5.8 or 5.9 inch display so that would mean a pixel density of 762ppi and 748ppi. The previously hinted at display might be using a “diamond pixel” or a non-standard pixel matrix arrangement, which is little bit different from the standard RGB stripe matrix.

The display of the Note 5 is rumored to start production by this August already. That means it might be just in time for the announcement of the new device by September during the IFA 2015 expo. We’ll be bringing you even more news, speculation, leaks over the next few months.