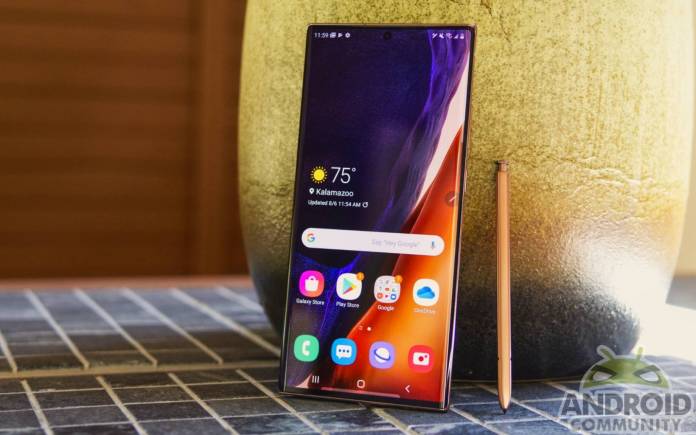 Samsung has definitely taken the, “If it ain’t broke, don’t fix it” approach with the Galaxy Note 20 Ultra. Samsung has stuck to the now-familiar trend of upsizing every feature of the phone, right from its big screen and big spec sheet to its big price tag. The phone is of course accompanied by the S Pen – an important tool for mobile notetakers. The Note 20 Ultra also features a powerful camera that proves to be quite capable of high-res photography.

Although the Screen is capable of a 120Hz refresh rate, this feature cannot be applied to the maximum screen resolution which is one of the few shortcomings of the design. Another issue faced occasionally by the users is that the camera, at times, struggles with the autofocus feature. Samsung’s ‘Go Big’ approach with the design and specs means that the battery consumption rate may not satisfy all users. Overall, the Note 20 Ultra may not be revolutionary, but it definitely radiates a familiar dependable feel.

The Design and Hardware

Right off the bat, one of the most notable design features of the Note 20 Ultra which makes it different from older models is that the volume and power buttons have swapped sides. The front features a curved Gorilla Glass Victus and on the back, we find more Victus with a smudge-resistant frosted finish. The front and back are separated by a metal frame with a polished finish. The frame is designed to make the Note 20 Ultra IP68 dust and water-resistant.

Something slightly inconvenient about the design is the camera bulge on the back. Its huge size and sharp edges make it a slightly tedious task to get the phone out for someone with slightly tight pockets. The S Pen comes accompanied with the Note 20 Ultra and fits snugly into a silo on the left side of the bottom edge, next to the USB-C port and the speaker. Although there is no headphone jack or USB-C type headphones accompanying the phone, Samsung makes up for this by including a 25-Watt USB fast charger.

The Note 20 Ultra has a 6.9-inch curved Super AMOLED screen with a WQHD+ (3088 x 1440) sharp and crisp display. The curved screen around the edges means that the phone is kind of susceptible to phantom touches depending on how you hold it. The screen brightness is capable of reaching over 1600 nits which means the screen is easily visible even under direct sunlight. 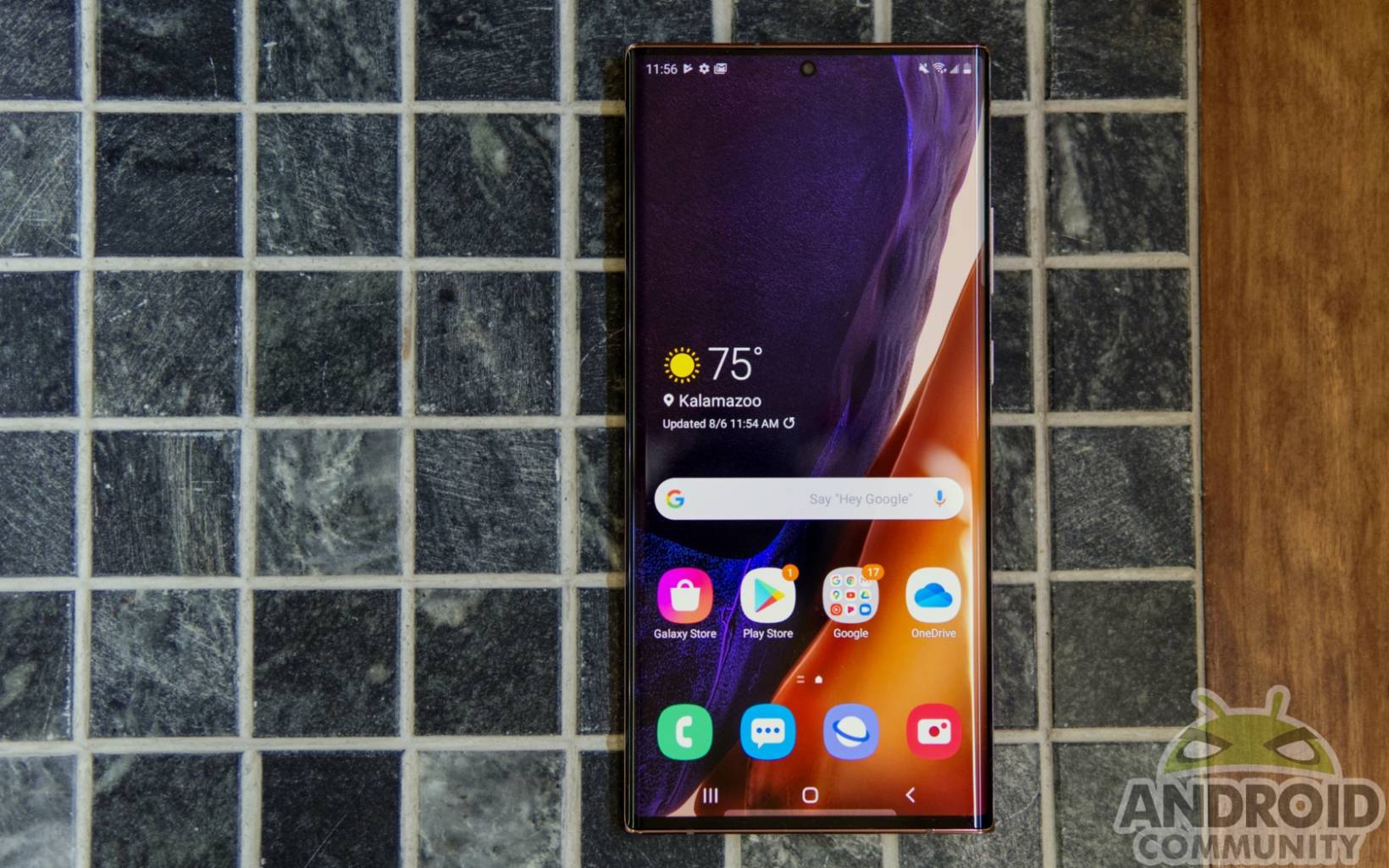 You can usually expect a refresh rate of 60Hz, but this can be raised to 120Hz if the resolution is changed to Full HD+ (2316 x 1080). The most direct impact of doing this would be that the battery life reduces noticeably. The screen also features an inbuilt ultrasonic sensor which works a lot better than it did on the previous models.

The S Pen and DeX

The S Pen is without doubt one of the defining features of the Note series. This year’s S Pen model is identical in make to that of last year and is also IP68 rates just like the Note 20 Ultra. The S Pen features a 0.7mm nib and is capable of automatically charging its battery when docked in the silo.

New software installed with the Note 20 Ultra allows for control via air gestures, and having cut the Inking latency means that drawing, sketching and writing have a better feel to it than before. Among the features added is one that auto-straightens handwritten notes when the option is selected. Another feature is that you can import PDFs and annotate them which makes signing documents a whole lot easier and on the go. Support for Outlook and OneNote is expected to be added as the months go by, and it will now be possible to access your Note 20 Ultra apps from your laptop.

DeX has now become a lot simpler making it extremely simple to connect with your TV as long as it supports Miracast. The USB-C to HDMI port conversion is always a backup option. The Note 20 Ultra can easily be used as a touchpad to control your apps on the TV, and up to 5 apps can be used on the screen at once.

On the camera hump, we find 3 lenses: a 12-megapixel ultra-wide, a 108-megapixel primary camera, and a 12-megapixel 5x telephoto. Alongside the lenses sit a laser autofocus system and a flash. The phone is also capable of 50x hybrid zoom. 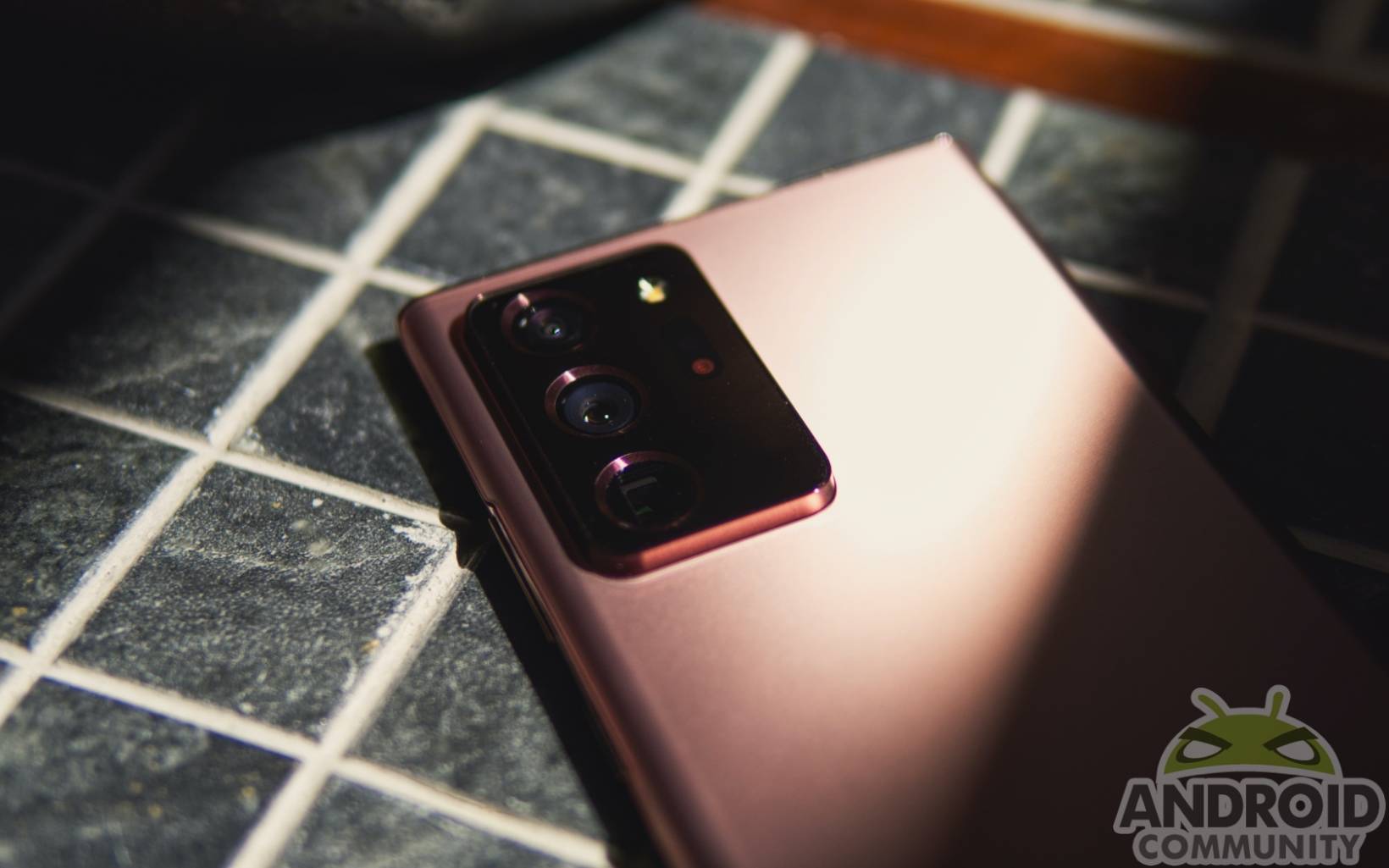 The Note 20 Ultra is very capable of taking some stunning photos. The 12-megapixel camera is the one used by default. Manually switching to the full resolution mode of 108-megapixels is quite easy as well. The f/1.8 lens is capable of features like background blurring without having to switch to portrait mode.

The laser autofocus, though improved, still is not perfect. It can at times still be sluggish to respond and occasionally requires you to tap the screen to manually shift focus. Furthermore, there is a notable delay between tapping the screen and the camera capturing the photo when in autofocus mode. Despite having a 50x zoom, the camera is hardly useful beyond a 20x zoom.

The 120-degree ultra-wide-angle camera when compared to the others, conveys a notable sense of depth to the photos taken. The selfie camera on the other hand is limited to an 80-degree field of view and is of and caps out at 10 megapixels. Two options of zoom are available in the selfie mode depending on how much of the background you choose to include.

When it comes to videos, the cameras are capable of capturing 8K 24fps video, or up to 4K 60fps video. If used with tracking autofocus, 4K 30fps seems to work best. The video effects are only limited to 1080p 30fps. An optional HDR10+ capture mode exists which only works with 4K 30fps or 1080p 30fps at most – and zoom-in mic. The addition of video mode adds manual control over things like focus, exposure, white balance, and ISO. You can also select which microphone you want to use for video with options of using external USB-C or Bluetooth microphones.

The Battery and Performance

The Note 20 Ultra supports 5G with SA/NSA, Sub-6, and mmWave support. WiFi 6 (802.11ax) and Bluetooth 5.0 come as standard features along with Ultra-Wide Band for short-range directional wireless support. Providing the juice for the Note 20 Ultra is a 4,500 mAh battery that supports fast wired and wireless charging. If you choose to operate your device at 120Hz, you should see the battery last you over a day quite comfortably. If you are a keen phone gamer, or you shoot 8K videos regularly, or you use DeX regularly, you may find the battery draining a lot quicker.

There has been a general opinion over the past couple of years of seeing the Note series evolve, and that is that the Note line has peaked. This is both a good and bad thing in my opinion. Although we see that Samsung really has maximized optimization with the Note 20 Ultra, we don’t see anything groundbreaking with this latest release. 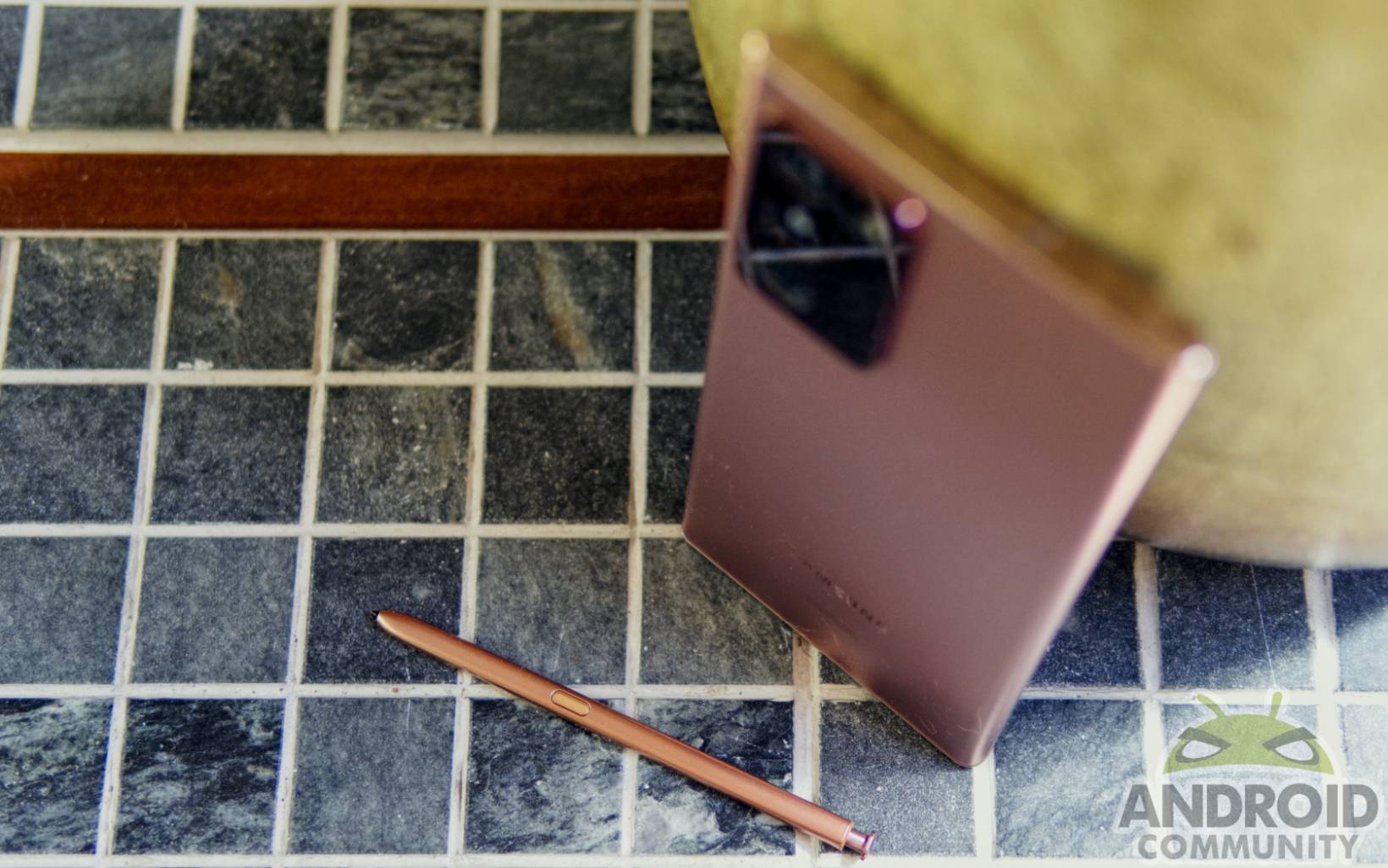 Don’t get me wrong, almost every aspect that could be improved had been in many ways. Right from a smoother-inking S Pen, a convenient DeX Wireless, to a 120Hz-capable display and more capable cameras. There is no denying that the Note 20 Ultra is the best Note in the series yet. However, I am keen to see what pathbreaking leaps Samsung makes in the coming years.