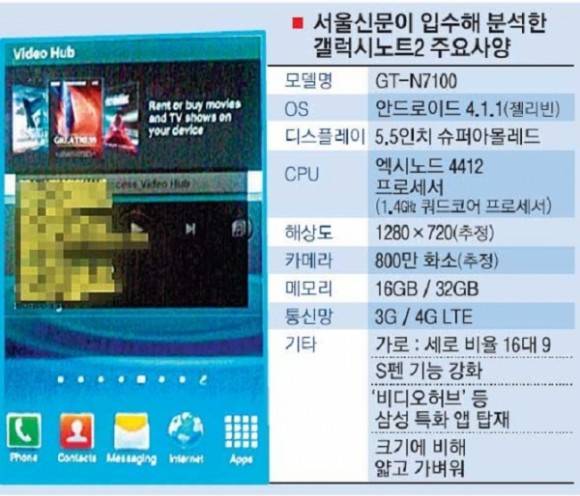 Samsung’s Galaxy Note 2 phablet is just a few short days from getting officially announced and unveiled to the world, but now a Korean newspaper might have spoiled a few more details a bit early. The Galaxy Note 2 model GT-N7100 (first note was N7000) will rock all the specs we’ve been hearing rumors about for the past few weeks, but this leak allegedly confirms Android 4.1.1 Jelly Bean on board.

With all the talk of Samsung getting Jelly Bean ready for the Galaxy S III, also releasing the new flagship Galaxy Note 2 with Android 4.1 seemed logical but you never know these days. The specs leaked today seemingly confirm Android 4.1.1 Jelly Bean, the 5.5-inch 1280 x 720p display — an HD Super AMOLED — then just as expected an 8 megapixel camera, 16/32GB storage options, as well as both 3G and 4G LTE models.

Then as you can see above the Samsung Exynos 4 Quad 4412 1.4 GHz quad-core processor is on board, just as expected. While nothing has been technically confirmed we’ve been hearing rumors and seeing leaks with this type of information for over a month, this just comes from a more reliable source.

So far it appears that Samsung will be blending the specs of their Galaxy S III with the previous generation and first Note for an impressive handset. If they’ve managed to keep the size the same, or make it thinner, while also improving on the battery we’ll have a real winner here. The previous Note sold far more than many expected — so we’re excited to see the all new Galaxy Note 2.

IFA 2012 starts this week in Berlin, Germany, and we’ll be on the ground capturing all the details as Samsung lets them out so stay tuned right here at Android Community.