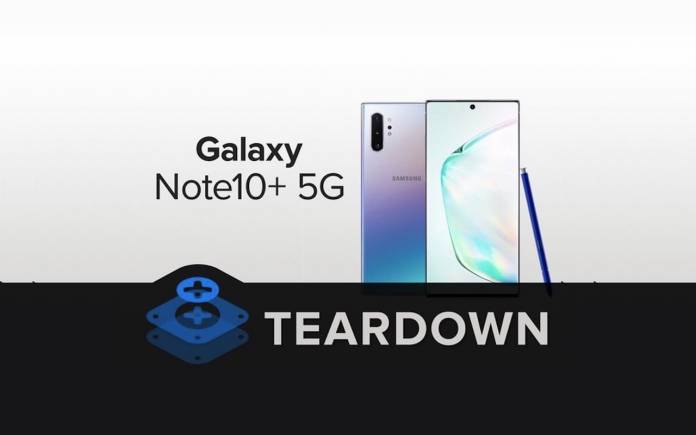 The Samsung Galaxy Note 10+ 5G phone is perhaps that most premium flagship smartphone that is commercially available today. It may be overtaken by the Galaxy Fold when it’s released but that’s something we have to wait for a bit. The Note 10+ 5G has been opened and tested for durability. The IFixit teardown analysis gave us a glimpse of what’s inside while JerryRigEverything’s Durability Test has shown us how the expensive phone is worth the price. If you’ve been weighing if the Galaxy Note 10+ is for you, read on and see for yourself.

Some notable difference of the Note 10 from Note 9 is the absence of the headphone jack. The rear fingerprint scanner is also now gone. The cameras are laid out differently so when opening the phone, you need to be more careful.

With some heat and the help of a pick, the rear cover is easily taken out. The mid-frame is held by some Phillips screws but can also be easily removed. Upon removal of the frame, you will see the motherboard now placed on top of the phone like the Pixel. When the large battery is removed, you can easily see all the other important components like the SIM + microSD tray, camera system, and the many other chips and sensors.

Final Repairability Score is 3 out of 10. This means you can’t easily repair the flagship smartphone on your own. A lot of components are modular and replaceable. The challenging part here is when you need to un-glue the glass rear cover that is fragile. The battery has been glued-down so difficult to replace as well.

When it comes to Durability Test, of course, the phone has passed with flying colors. Oh you know, the usual. The Note 10 5G’s Gorilla Glass 6 display scratched at level 6, with deeper grooves at level 7. The phone’s build is aluminum so it can be scratched but no permanent damage.

Under direct heat, the display is marked but goes away after some time. And now for the Bend Test, bending the phone from the front and back doesn’t do anything at all.