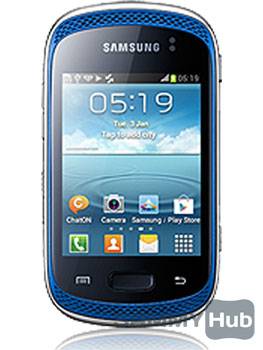 Who is ready for another Galaxy device from the folks at Samsung? I know they’ve been overloading the market as of late but this time around it’s all about the music. This is certainly no flagship or top-tier smartphone, and will instead be a budget aimed device — probably for teens wanting to have some exceptional audio quality from their smartphone. Lets take a look at the leaked details below.

The specs are certainly nothing special, but thanks to the guys at SamMobile we have the photo slides that leaked for your viewing pleasure. As you can see from the image above this smartphone is all about the music. Just when we thought we couldn’t get any more oddly sized and shaped Samsung Galaxy devices they launch this. Here’s some of the specs: 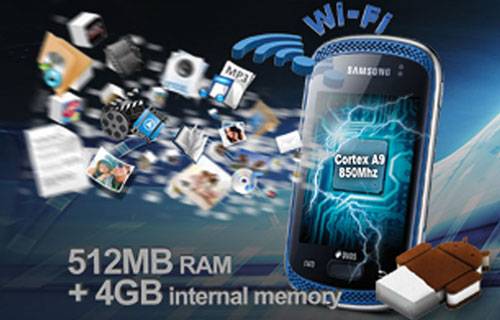 Clearly you can see it’ll be running Android 4.0 Ice Cream Sandwich, but other than a few leaked specs we don’t have the full set of details. What we do know is this phone will rock a average at best 3-inch QVGA (320×240) display, run with a single-core 850 Mhz processor, have 512MB of RAM, and 4GB of storage to hold a few thousand songs. You’ll also get WiFi, Bluetooth, Micro-USB, GPS, and even a micro-SD slot for extra storage. We can’t forget that 3 megapixel camera either. One of the major selling points will be the physical dual stereo speakers on the front of the device.

Certainly a low end smartphone here. Apparently the Samsung Galaxy Music will be headed to the market soon complete with Android 4.0 Ice Cream Sandwich, and they’ve already got plans for 4.1 Jelly Bean updates too. We can then expect the Samsung Galaxy Music DUOS to arrive in the international markets with dual-SIM support. More details can be found at the additional source link below.

[via SammyHub] — Thanks to all who sent this in!