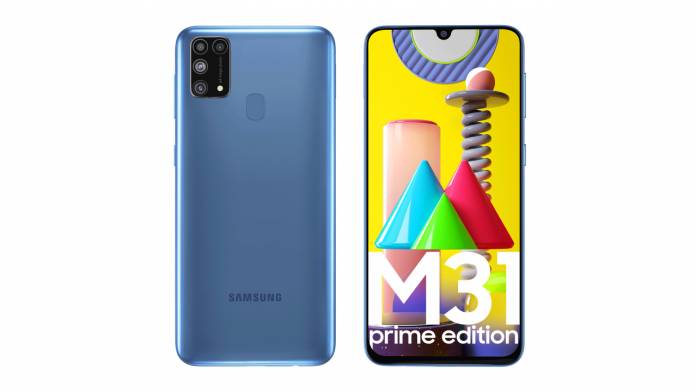 If you in the market for a smartphone that has a great display, mammoth battery, and good performance but you do not want to spend on a high-mid ranger – Samsung Galaxy M31 is already an undeniable option. Now for Amazon fans in India, the online retail giant and Samsung have joined forces to introduce Galaxy M31 Prime Edition, which comes “seamlessly integrated” with the most popular Amazon ecosystem apps.

According to Samsung, Galaxy M31 Prime edition will be available in three color variants – space black, ocean blue, and iceberg blue – and it will be priced at INR 16,499. Amazon will be providing some special offers to increase the sales of the Galaxy M31 Prime. For instance, during the course of Great India Festival, HDFC bank credit and debit card holders will get 10-percent instant cashback, while Prime members will be eligible for INR 1000 Amazon Pay cashback on prepaid payments.

For the innards and specs, the special edition Galaxy M31 Prime is similar to the standard model. It has a 6.4-inch Infinity-U sAMOLED notch display comprising 32MP selfie camera capable of 4K video recording and slow motion. On the back, the phone gets a 64MP quad-camera setup with 8MP ultra-wide, 5MP macro, and 5MP depth camera. The ultra-wide camera has a 123-degree field of view.

Galaxy M31 Prime runs Android 10 out of the box and has a mammoth 6000mAh battery that comes with Type C 15W fast charger. For power, the smartphone has Exynos 9611 processor under the hood paired with 6GB of RAM and 128GB of internal storage (expandable up to 512GB). Samsung says Galaxy M31 Prime edition will also retail through Samsung.com.