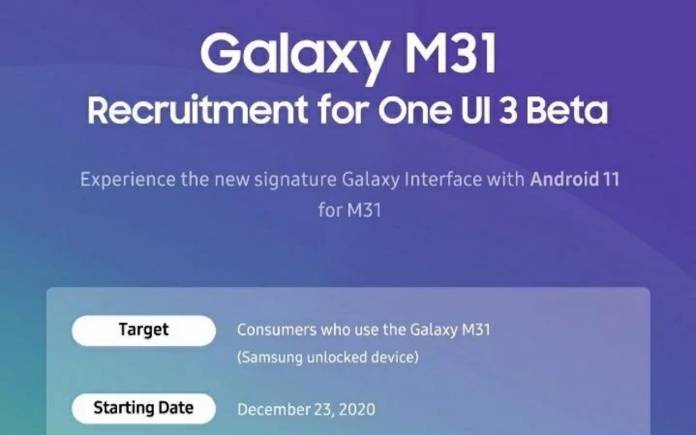 Two other Galaxy phones are ready to receive the One UI 3.0 update. It’s only the beta version but at least the Galaxy M31 and the Galaxy A51 5G are getting new features and enhancements. The Galaxy M31 is the first-ever mid-range Android smartphone from the South Korean tech giant to get the latest One UI build. Samsung has started to release One UI 3.0 to some of the latest flagship phones like the Galaxy S20, Galaxy S10 Lite, and Galaxy Note 20. More devices will also get the same in the coming weeks and months.

The Galaxy M31’s One UI 3.0 beta program is initially ready in India. If you own a Galaxy M31, you may want to enroll in the beta program. Note that you will encounters bugs and issues. It’s not a stable build but feel free to share your findings with the Samsung developers.

Specifically, the firmware version M315FDDU2ZTLF is the first beta update for the Samsung Galaxy M31. It delivers Android 11 OS plus the latest December 2020 security patch. As with most One UI 3.0 releases, this one delivers a newer UI design, better security, improved stock apps, more optimizations, bug fixes, and faster performance.

The Samsung Galaxy A51 5G is also ready for the One UI 3.0 beta program. Those in South Korea can already sign up for beta. It’s highly recommended you help in testing the beta version and offer feedback to Samsung so the devs will know what to work on or add.

After the beta version, the stable build will soon be ready. We don’t have the details when exactly but looking at the timeline, a March 2021 public release can be expected.