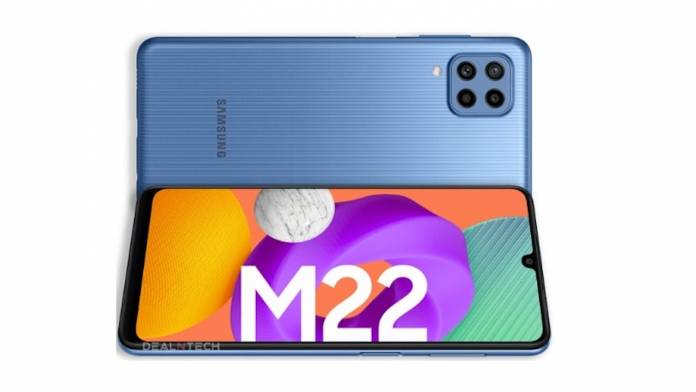 A new Galaxy M series phone is anticipated to arrive. Samsung has new mid-range smartphones lined up apart from the Galaxy Z foldable phones that are expected to be unveiled next month. Just last week, the Samsung Galaxy M32 was made available in the UK after earlier reaching India. There is the Galaxy M52 5G also coming to Europe with Snapdragon 778G SoC. Of course, we also won’t forget the Samsung Galaxy M12 launching with a 6000mAh battery and a 90Hz display.

The next Galaxy M phone will be the Samsung Galaxy M22. Specs and renders have been leaked recently. We are learning the Galaxy M22 will run on a 5000mAh battery.

The device has been spotted on NBTC in Thailand. The National Broadcasting and Telecommunications Commission has listed the phone as model number SM-M225FV. Image renders of the phone are ready for scrutiny.

The Samsung Galaxy A22 is probably what you will remember when you see the Galaxy M22. The camera module is also shaped like a square for the quad cameras. Just below is an LED flashlight. For the selfie shooter, there is a waterdrop notch.

Specs and features of the Samsung Galaxy M22 include a 6.4-inch HD+ Super AMOLED screen, 720×1600 pixel resolution, 90Hz refresh rate, 4GB of RAM, MediaTek Helio G80 processor, and a 128GB onboard storage that can be expanded to 1TB via a MicroSD card slot. When it comes to imaging, there is a rear quad camera system (48MP primary wide + 8MP ultrawide + 2MP macro + 2MP depth) and a 13MP selfie camera with f/2.0 aperture. The battery also comes with 25W fast wired charging.