The Galaxy M is already an old series. It was first announced in 2012, bringing AMOLED to the budget crowd. We’ve seen and tried a number of Galaxy M phones including the Samsung Galaxy M Pro. It will remain as a low-cost product series but we’re not sure until when. The South Korean tech giant needs to do a number of changes especially in the mobile market but we’re positive it will be better next year as the Galaxy X foldable phone and Galaxy S10 variants will be unveiled in the first half of the year.

A new Galaxy M phone will be revealed in the coming months and the device has been benchmarked already. The Galaxy M20 or SM-M205F was sighted on Geekbench, bearing some mid-range specs and features including 3GB of RAM and an Exynos 7885 chipset.

The upcoming Galaxy M device will only run on Android 8.1 Oreo out of the box. Release may be early 2019 which possibly means it will be unpacked alongside any of the premium flagship phones during the MC 2019 or maybe even as early as the CES in January.

The Samsung Galaxy M20 (or Galaxy M30) may be offered in single-SIM or dual-SIM variants depending on the market and region. We don’t think Super AMOLED will be used in this series since it’s a budget line. We’re only looking at LCD screens. 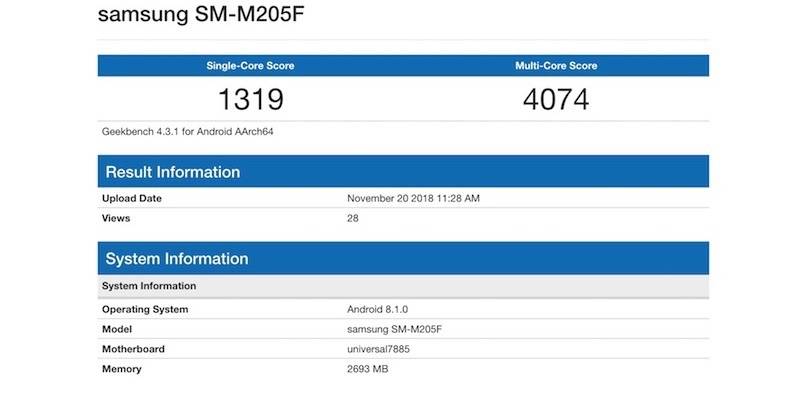