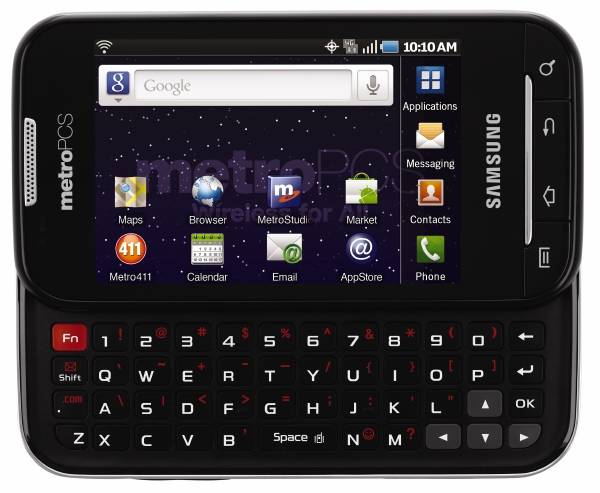 MetroPCS has announced its second 4G LTE smartphone, and this time around it’s Android doing the honors. The Samsung Galaxy Indulge is a 3.5-inch Android 2.2 Froyo slider packing 4G connectivity along with the 1GHz Hummingbird processor.

Specs are relatively basic, with a 3-megapixel camera and Bluetooth, but the Galaxy Indulge is really all about the pricing. MetroPCS will be offering unlimited data for $60 per month on a non-contract basis, while the phone itself is $399 (again, with no agreement). It’ll be in stores later this week.

Consumers can have it all – apps, entertainment and organization tools with lightning fast speeds – at about half the price of other 4G smartphone service plans

At about half the cost of other 4G smartphone service plans today, consumers can truly have it all with MetroPCS’ $50 and $60 4GLTE smartphone service plans, which include all applicable taxes and regulatory fees. MetroPCS is delivering this unmatched value with unlimited talk, text and 4G LTE Web page browsing, along with data access to streaming audio, video and gaming content, downloads and Android applications.

“Our commitment to offering premium, feature-rich smartphones was once again fulfilled today with the introduction of the Samsung Galaxy Indulge, which will allow consumers to experience the vast benefits of both MetroPCS’ 4GLTE services and the Android operating system,” said Roger D. Linquist, president, CEO and chairman of MetroPCS. “Mobile consumers no longer have to choose between low cost service and high-end Android handsets. Instead, they can truly have it all by being able to select from a full spectrum of feature and smartphones paired with 4GLTE services at an unmatched value.”

Powered by Android 2.2 (Froyo), the Galaxy Indulge is the perfect smartphone for those who want to manage every aspect of their lives from a mobile device. MetroPCS’ 4GLTE service delivers lightning fast Web page browsing and also allows customers to watch and listen to exclusive entertainment and multimedia content from their favorite shows through the MetroSTUDIO application. Quick access to the Android Market™ provides more than 100,000 applications to consumers’ fingertips and Android’s intuitive user interface with Samsung TouchWiz enhancements makes customizing the device’s home screens simple and easy. The Galaxy Indulge’s combination touch screen/QWERTY keyboard means consumers can send messages via e-mail, SMS or social media channels through whichever input method they choose.

“The Galaxy Indulge integrates two of Samsung’s core product investments; the Android platform and bringing powerful and intuitive 4G-enabled devices to the U.S. market,” said Omar Khan, chief strategy officer for Samsung Mobile. “The Galaxy Indulge is loaded with the speed of the Android OS, true mobile broadband connectivity and a 1GHz processor with rich multimedia features for premium movie and TV content.”

The Samsung Galaxy Indulge is the second LTE-enabled mobile phone offered by MetroPCS, following the Samsung Craft TM which was introduced in late 2010. The Galaxy Indulge will be available in MetroPCS stores and online later this week with a suggested retail price of $399 plus tax.