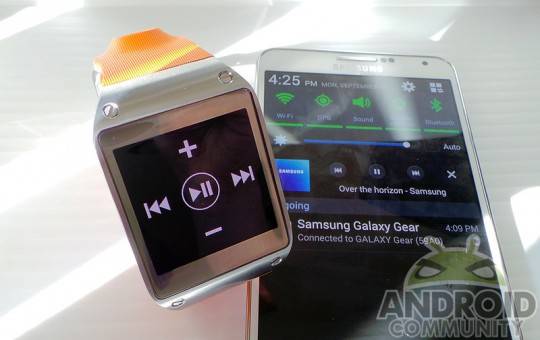 It seems many are still waiting to see what happens with the currently available Galaxy Gear smartwatch in terms of future updates, however rumors are suggesting Samsung may soon unveil the follow up model. According to reports coming from The Korean Herald, Samsung may be readying the Galaxy Gear 2 as well as another wearable for Mobile World Congress, which will take place in late February 2014.

As one would suspect with reports such as these, details are coming from sources, as opposed to from Samsung. The other device is fitness oriented, the Galaxy Band. In this case, the report mentions how both are “likely” to be unveiled in Barcelona during Mobile World Congress. The Korea Herald is reporting based on word from Lee Seung-woo, an analyst at IBK Securities.

“Samsung is currently working on the Galaxy Gear 2, and the product will be surely released early next year,”

The bit about the Galaxy Gear 2 unveil being set for Mobile World Congress is being attributed to an anonymous source that is “close to Samsung.” Further comments from that same unnamed source touch on how seeing these items in February are a “high possibility.”

While the timeline seems to be narrowing down, the details remain a little light. From what we are seeing, the Galaxy Gear is said to have a “flexible organic light-emitting diode display.” Unfortunately, there wasn’t much else in the way of specifics on the smartwatch. It would also appear Samsung is taking an approach that is opposite Pebble — they are running with software upgrades, whereas it seems Samsung is going to iterate with hardware.

As for the Galaxy Band, this one is looking like it will be similar to other fitness bands. Sort of along the lines of what we have been seeing from the likes of Fitbit and Jawbone. Of course, given what we have already seen from Samsung in the past, we would expect the Galaxy Band to have some tight integration with the Galaxy line of devices and the existing offerings such as S Health. Further talk on the Galaxy Band touch on how it will be able to “monitor physical conditions such as pulse and blood pressure.”