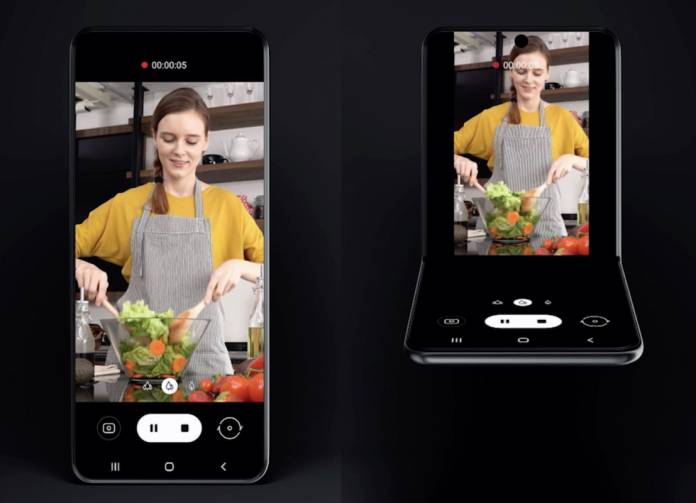 The idea of a Samsung Galaxy Fold 2 is not impossible. The South Korean tech giant is said to launch more foldable phones in the future but it’s not clear when. There is the question of how it will be different from the original model that’s been problematic and then redesigned. Hopefully, the next generations of foldable phones with flexible displays will be better than ever with fewer issues. For this year, it’s certain there is only one Samsung foldable phone but at the recent developer conference, the company has teased a clamshell-like foldable device.

At the Samsung Developer Conference, the tech giant shared its plans to expand the One UI interface. It’s already on version 2.0. A new foldable smartphone was also shown off.

It’s only a teaser so don’t expect any new model before year-end. The foldable device looks more like a clamshell phone as it folds horizontally—different from the vertically-folded first-gen Galaxy Fold. When opened, it looks more like a Galaxy S10.

The original Galaxy Fold has been redesigned already and so far, no major issues have been reported. The concept foldable phone is like a flip phone which you can easily store in your pocket. The current foldable phone model is large while the size of this one is just perfect with a 6-inch screen.

Aside from ONE UI, Samsung is said to be working on a Unified User Experience. It aims to make One UI 2 work seamlessly on both interfaces whether unfolded or folded. When it comes to Android 10, there is foldable support but still needs a lot of work. It now allows third-party apps to work on the flexible screen which may also find its way to the horizontal fold orientation on future phones.

Samsung showed off an image render. It’s not real—just a concept foldable phone. We won’t be surprised though if the brand comes up with something similar. It’s a possibility but it may take a while since they’ll be placing the hinge differently.