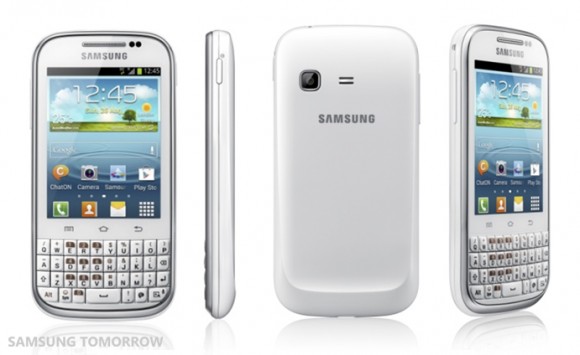 Smartphones with hardware keyboards are becoming a rarity these days, especially the candy bar Blackberry style. Samsung however has just announced a new hardware QWERTY keyboard rocking Galaxy device that also comes with Android 4.0 Ice Cream Sandwich. It isn’t exciting by any means, but could get a few people interested.

Being called the Samsung Galaxy Chat this phone is indeed as low-end as it gets, although Samsung did confirm at least one version will offer 4G LTE. They’ve paired a 3-inch QVGA display with a hardware QWERTY keyboard, Android 4.0 Ice Cream Sandwich, and a 2 megapixel rear facing camera. The Galaxy Chat also offers 4GB of storage and a 1,200 mAh battery which should be plenty for that small screen.

Samsung appears to have no immediate plans for a US launch, but it will be arriving in Spain first then followed by Europe and other parts of the country later this month. We have no details on pricing but Samsung says it will be priced “competitively” when released. Who’s interested?