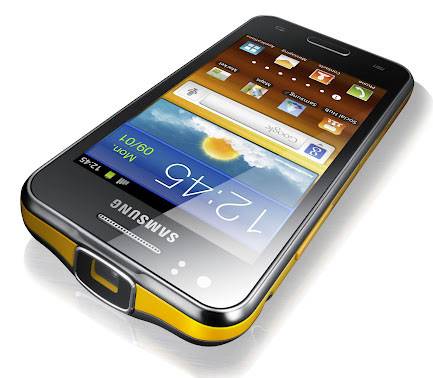 You love smartphones. You live in the UK. And you’re a martyr to the 20-pound projector that you constantly carry around in your backpack. Congratulations, you’re the perfect candidate for Samsung’s Galaxy Beam, with its integrate pico projector – and you can reserve your unit now. UK web retailer Clove has the Galaxy Beam up for pre-order for £369.00, £442.80 after taxes. That comes out to just over $700 USD. Ouch. The release date isn’t mentioned on Clove’s website.

For that considerable chunk of cash, you get a mid-range phone constructed around a tiny projector. The 15-lumen lamp is capable of projecting a 640×480 display up to 50 inches. The phone itself is a little uninspiring: Android 2.3 with TouchWiz runs on a 1Ghz Snapdragon processor. The 4-inch LCD screen is 800×480 (just a little more resolution than the projector is capable of displaying) and the internal memory is a roomy 8GB. Cameras are 5 megapixels on the back with 1.3 megapixels on the front, and the phone features an oversized 2000mAh battery for the projector.

While it’s not the slimmest or prettiest phone around, the Beam’s form follows its unique function. A manual projector button just out the side and focus controls get their own hardware buttons. Even so, it’s hard to think of someone who’d prefer an expensive mid-range phone with an integrated projector to a cheap pico projector with video going to it from an HDMI-enabled phone. For the limited amount of time you’d need this, does it really justify the cost? Samsung hasn’t said when it’ll bring the Galaxy Beam to the European or Asian markets, or if it’s coming to North America.

[via Know Your Mobile]