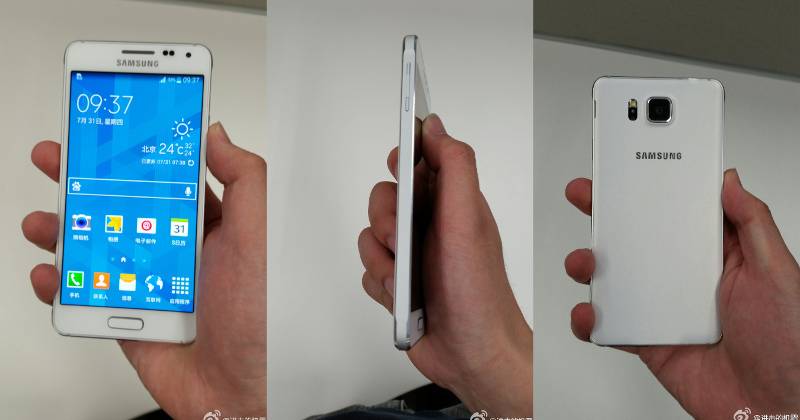 With August 4 almost over (at least in some timezones), it seems that Samsung won’t be making the Galaxy Alpha announcement today after all. But that’s OK, because now we’re getting more solid details about this rather puzzling smartphone courtesy of an accidentally published, and now removed, product page from UK retailer MobileFun.

This leak doesn’t really give us anything new to work with but simply consolidates and affirms most of what we’ve already heard. It’s a relief to see that the 720p screen is indeed a slightly lower 4.7-inch one instead of 4.8 inches in one batch of rumors. The slight difference in size affords it a higher pixel density of 320 dpi. Although not named, the product description talks of an octa-core Exynos CPU with unprecedented speed. We’re presuming, or perhaps hoping, that this would be the fabled Exynos 5433.

It is interesting that the description does include but doesn’t really emphasize the “stunning metallic design” of the Galaxy Alpha, which would be a key differentiator of this smartphone from the rest of Samsung’s brood. Perhaps Samsung just doesn’t want to draw too much attention to the device’s similarities with a certain competitor’s design. The 32 GB of internal storage is mentioned, but the lack of any indication of a microSD card slot indirectly confirms rumor of that feature or rather the lack of it. There’s also a 12 megapixel camera at the back and 2.1 megapixels on the front. And yes, there is a fingerprint scanner on board, though there is no mention of a heartrate monitor.

Interestingly, the Galaxy Alpha carries a ₤549 price tag, quite a hefty sum when directly converted to roughly $925. That is, of course, for the unlocked SIM free version in the UK but is still too much considering the Galaxy S5 only sells for around $600. Hopefully, we’ll hear better news when the unveiling takes place, either on August 13 as previously leaked or on September 3 at IFA together with the Galaxy Note 4. MobileFun’s page doesn’t provide any photos, but, if you’re willing to subscribe to leaks, we’ve got two batches of them in black and white.