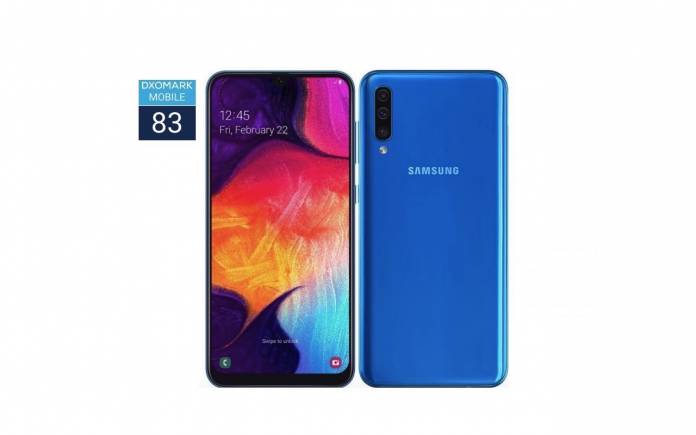 While fixing the Galaxy Fold and preparing for the next premium flagship Galaxy Note 10, Samsung is also releasing new mid-range phones left and right. The most notable we featured was the Galaxy A50 announced last February as major mid-range upgrades. It was introduced together with the Galaxy A30 and followed by the Galaxy A20 and the Galaxy A10e in the US. The South Korean tech giant has once mentioned it will be focusing on the Galaxy A for the mid-range market. It’s almost premium with the design and some specs but don’t expect too much.

The Samsung Galaxy A50 has reached DxOMark. This means the phone has been tried and tested comprehensively. Photo quality is evaluated, following a set of categories. DxOMark Mobile Tests are considered the ultimate today because it ranks the smartphones according to their specs, features, and results.

To review, the Samsung Galaxy A50 comes equipped with a big 6.4-inch AMOLED screen, FHD+ display, a small waterdrop notch, thinner bezels, and an Exynos 9610 processor. When it comes to the cameras, there is the triple rear camera system that includes a 25MP main cam with 26mm f/1.7 lens, 8MP ultra-wide camera with 13mm f/2.2 lens, and 5MP depth-sensing shooter for bokeh images. The device also offers LED flash, PDAF autofocus, and 1080p/30fps video recording.

The Android smartphone is mid-range so we’re not surprised if scores are just good enough. The average is 83 from the 85 Photo and 79 Video scores. Judging all the test photos, the Samsung Galaxy A50 offers pleasant and vivid colors in bright sunny conditions. Dynamic range is quite wide while autofocus is generally fast and repeatable. Faces are well-exposed in backlit conditions while you can rely on good color and accurate white balance using flash.

When it comes to video recording capabilities, you may only notice pleasant colors and well-controlled noise in both outdoors and indoors. Stabilization of static handheld videos is fairly efficiently. Some disadvantages include autofocus instabilities, visible and strong residual high-frequency motion, low level of detail, scene integrity artifacts under indoor and low-light conditions, and coarse noise artifacts in low light.