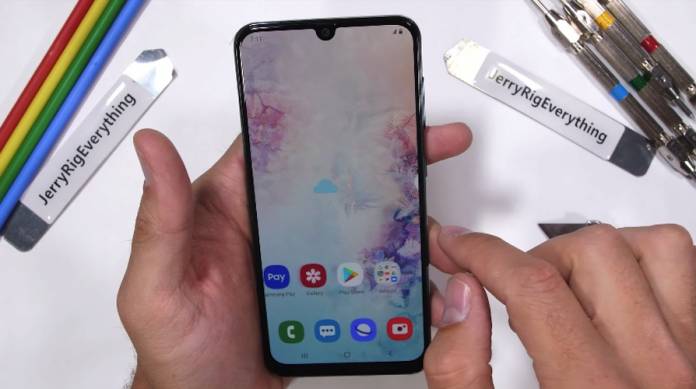 It was in February when Samsung released the Galaxy A50 A major mid-range upgrade together with the Galaxy A30. We noted that it would already be Samsung Pay-enabled in the US and the phone did roll out in the US last June. The phone also hit DxOMark with decent Photo and Video Scores and we’ve always been curious how it would hold up. Of course, dear JerryRigEverything had to do a Durability Test. The phone has undergone the standard Scratch, Burn, and Bend Test.

The results have been favorable. Watch the full video below and see for yourself.

The phone costs only around $300. It’s mid-range for it only uses an old Gorilla Glass 3 but it still scratches at level 6, with deeper grooves at level 7. There is a notch in the front screen holding the 25MP selfie camera that doesn’t really scratch. There is an earpiece grill on top of the notch.

The Samsung Galaxy A50’s build is mainly plastic so most parts scratch but aren’t damaged. Adding heat to the screen doesn’t do anything even after several seconds.

When it comes to bending the phone on both sides, there’s some flex but again, the phone isn’t damaged. For such a mid-range smartphone with great cameras, the phone’s durability is something that will make you decide to get one.

The Samsung Galaxy A50 looks fancy with its design and chameleon color but it’s really just a mid-tier phone. The plastic all around is proof but it doesn’t really matter as long as the specs are decent enough.