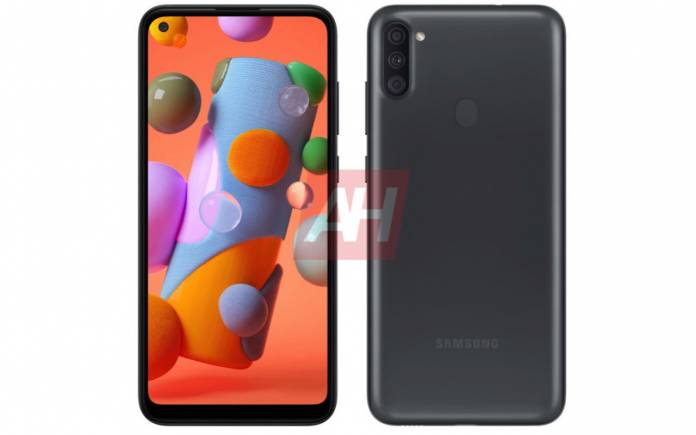 Samsung has a number of new products in the works. After the premium flagship series and the Galaxy Z Flip, the South Korean tech giant is expected to unveil the Galaxy Tab S6 Lite, Galaxy A41, and the Samsung Galaxy A11 soon. The new Galaxy Tab was already presented last week. Two new mid-range phones are being prepped for announcement and market release. The Galaxy A series smartphones are expected to be budget-friendly. The last Galaxy A modelS we featured here were the Galaxy A51 and Galaxy A71 with quad rear cameras back in December.

The Samsung Galaxy A11 is definitely a budget device. We’ve seen a render over the weekend. We don’t doubt the final design will be close to what you see above. It’s only a matter of time before the official reveal is made.

Samsung’s Galaxy A11 will be equipped with a triple rear camera system. There is an Infinity-O display that houses a selfie camera but the bezels are still thick. The budget phone also features a large 6.2-inch HD+ screen, 3GB of RAM, Exynos 7 octa-core chipset, and a 5000mAh battery. The large battery capacity may last up to two days.

When it comes to imaging, the three rear camera system is headlined by a 13MP shooter with 5MP and 2MP sensor. The selfie camera under the punch hole is 8 megapixels. The budget phone is expected to be released in the US via prepaid carriers and MVNOs like MetroPCS, Cricket, and Boost Mobile.

A Samsung Galaxy A41 is also in the works. A set of image renders has surfaced online, giving us a glimpse of a new budget-friend smartphone. It appears to have an Infinity-U waterdrop notch on a 6- or 6.1-inch screen. On the rear, there are three cameras on a vertical orientation plus an LED flash. The main camera will be 48 megapixels.

The phone may have an on-screen fingerprint sensor. Some features include an ejectable SIM card tray and hybrid microSD card slot on one side plus a USB Type-C port, loudspeaker grill, and a 3.5mm audio jack on the bottom edge. Other specs include an octa-core MediaTek Helio P65 chipset, 4GB RAM, 64GB or 128GB built-in storage, One UI 2.0 plus Android 10, and a 3500mAh battery with 15W fast charging tech.