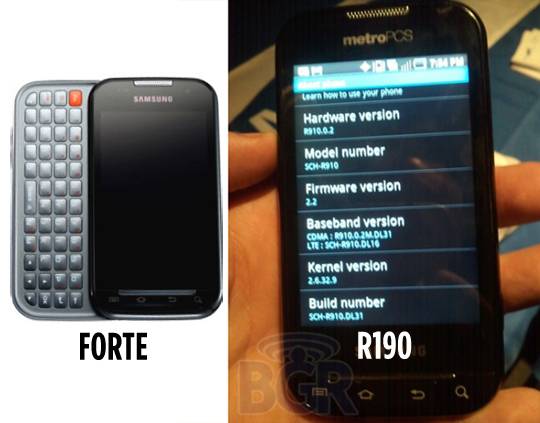 Take a peek at this simple looking little lady, one that looks very similar to a phone (the R190) that was leaked yesterday, so similar, in fact, that we’re not sure why MetroPCS would… you know… do such a thing. Two phones that look exactly the same and are – but the source this source is sourcing from (Samsung Hub) says that two are different.

And maybe they are! The specs seem dead on – Android 2.2 (with possible Android 2.3 upgrade), 1GHz Hummingbird processor, 5MP camera, TouchWiz UI and microSD card slot, but perhaps the hardware is just a tiny bit different. The R190 might not have a flip-out keyboard, the Forte does, the Samsung logo is below on the R190, the Forte has it above, and the R190 has a visible MetroPCS logo where the Forte does not. But these could also ALL be because image is further developed than the other. Opinions?