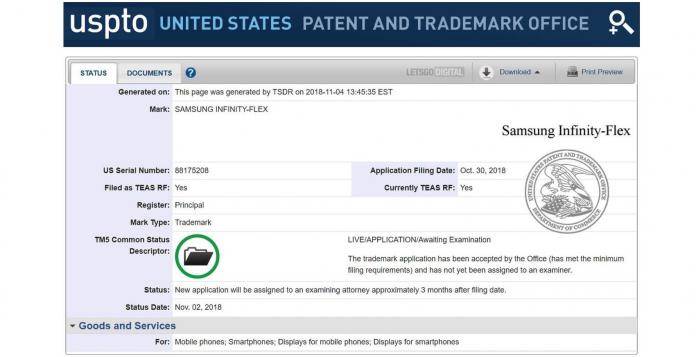 Samsung seems to be ramping up the Galaxy foldable phone especially now that we’re on the last few weeks before year-end. The South Korea tech giant is expected to roll out the foldable device in January or just before the Galaxy S10 is revealed. More details are being shared left and right including a new Samsung logo, the Samsung Galaxy F name, and the design that shows a flexible display wrapped around a device. There’s also that info the bendable tablet may hit production soon.

We’re guessing each one will be for every Galaxy S10 variant. The Flex version, we’re assuming, will be used on the foldable phone that is now being finalized and then mass produced,

The United States Patent and Trademark Office (USPTO) shows that new brand names will be different from each other. The Infinity display technology has been ready since the Galaxy S8 was released last year, providing an almost full screen.

The different Infinity display could be just different variants used in different Galaxy models. Let’s wait and see for Samsung’s announcement or confirmation.