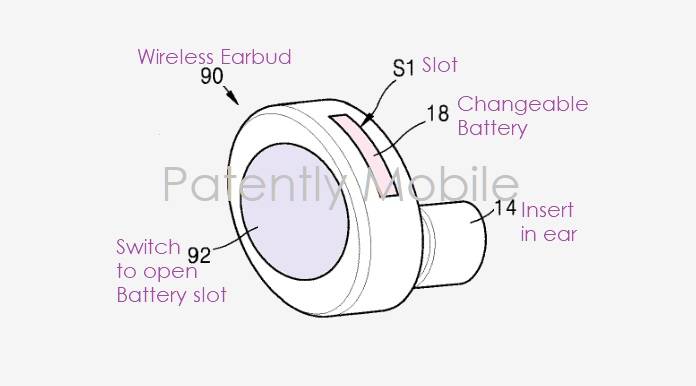 Samsung always wants to one-up its staunchest rival Apple not just with smartphones but even with accessories and peripherals. Their Galaxy Buds were an obvious competitor to the Apple AirPods. But now it looks like they want to have an advantage over the latter as a patent they filed with the US Patent & Trademark Office shows plans to release a battery changeable version of their wireless earbuds. Of course, a patent filing is no guarantee that the product will ever be produced but it’s still interesting to see potential ones.

According to Patently Mobile, the supposedly future Galaxy Buds will have changeable coin-cell batteries and you will be able to still continue listening to your music or podcasts even as you change batteries. According to their filing, the earbud has a button (switch 92 in the diagram) where you can control the earbuds themselves as well as the changing of the batteries. The switch button obviously turns the earbuds on and off but also opens the battery tray slot.

There is also an elastic ring in the inner surface of the battery slot and a contact terminal which will make it still connectable even as you’re changing batteries. As to why you’d want to do that is a mystery. But at least if you still need to continuously listen to whatever it is you’re listening to, you won’t be interrupted.

Another supposed “twist” to the earbuds is that there is a mini jack so you can plug it into a charging case when you’re using it at home or somewhere where it’s convenient to not be totally wireless. This way you can save your battery life for when you really need to be wireless.

As we said, patent filings aren’t a guarantee that this product will see the light of day. But if it does, then they will have an advantage over the Apple AirPods, unless Apple is also planning something like this (which we doubt).