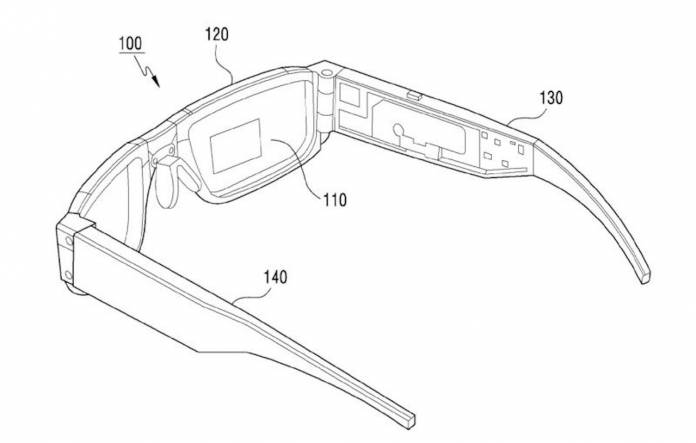 The Augmented Reality revolution has probably only just begun as we see more games, apps, smartphone features and devices being released on this platform. Samsung is on board obviously and the latest patent that they have filed is proof that they are exploring even more things related to AR. It looks like they are looking into developing foldable AR glasses that are more convenient than the Samsung Gear VR. But as always, since this is still a patent, we don’t know if it will eventually translate to a commercial product.

According to an article on Engadget, the patent for the AR glasses submitted to the US Patent & Trademark Office was spotted by Patently Apple. Compared to the already existing Gear VR, which is obviously more about virtual reality than augmented reality, the device looks more like your typical glasses. As per the documentation, it is a device that will automatically switch on when it’s unfolded and then worn.

When it is unfolded, the projector mounted on the temple would then beam images on a small display which you can see in your field of view (hopefully). There may also be magnetic sensors on the device so that the display won’t switch off if you turn your head wrong. The sensor would ensure it will work in the unfolded position until you actually remove it and fold it. Aside from what it should look like, no other details were revealed about the hardware and software of the glasses.

Since this is only a patent application, the final product may probably look different. And of course, we won’t know yet if there will even be a final product, depending on Samsung’s Ar-Related plans. But if they do get the patent, expect the Korean OEM to start experimenting with the device already.

As for whether it will be ready for commercial release soon, that would depend on ARM-based processors and other hardware considerations, not to mention whether or not people would actually buy something like this.