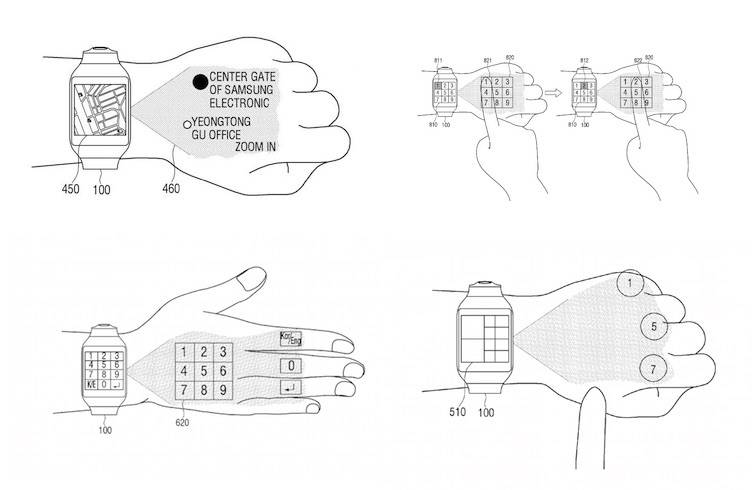 Samsung is one those forerunners in the wearable industry. It launched its own platform called the Tizen OS and didn’t use Android Wear. So far, so good. Samsung is doing well in this area despite the numerous competitors. Other OEMs chose Android Wear but Samsung developed its own and launched the Gear S and Gear S2 (plus the Gear S2 Classic). We’re in this day and age when a smartwatch is already a standard in the mobile industry although it still has more room for improvement.

A smartwatch is limited to a very small screen. Even if you make the watch display bigger than usual, it will still be smaller than that of a smartphone. Size will always be limited but Samsung has thought of another way to at least make it bigger. One solution is a small projector that extends the display on the hand of the wearer. This is not a joke and a patent has been filed recently with the USPTO.

This Samsung smartwatch concept will have the project image work as a dial pad, space for writing, or menu options. It’s only a concept but the idea to extend the working display will be beneficial. A smartwatch may never replace the smartphone but it will be useful for some people.

The Samsung smartwatch concept is what it is–still a concept. It’s still a patent and we’re not sure if the South Korea tech giant will move to production but it’s nice to imagine something as cool and futuristic as this.

SOURCE: US Patent and Trademark Office