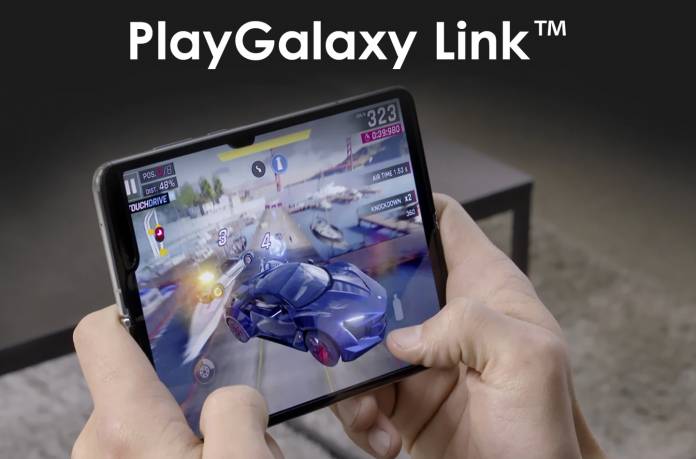 Since it’s already an open secret that Samsung is developing a gaming-focused smartphone (which may also be foldable, similar to the Galaxy Fold), then it’s not really surprising that we’re getting news that the Korean OEM may be developing a gaming service as well. A leaked filing with the US Patent and Trademark Office shows that they have filed for the trademark for the name “PlayGalaxy Link” which may be a sort of confirmation that we’re getting this mobile gaming service as well.

Dutch news website Let’s Go Digital reported the patent filing for “PlayGalaxy Link” and the filing has a description that may give us some indication sa to what it’s all about. It says it’s a “downloadable mobile game application software”. There is also mention of a online augmented reality games, online computer game tournaments, and games being accessed through mobile devices.

A few weeks ago, Samsung partnered with Hatch, a Rovio subsidiary, to launch a cloud-based gaming service. If you get a Galaxy S10 5G, you get three months free subscription to the service. But this is probably just in Korea as the “PlayGalaxy Link” name was only in the US and reportedly, in Europe as well with the European Union Intellectual Property Office. We have no news yet if this possible service will also be available in other territories.

It’s also the same Dutch website that reported about a design patent for a smartphone that has dedicated gaming buttons that can be hidden if you’re not playing games. It may be a device with a foldable display but is different from the already announced Galaxy Fold. This may be a good thing for the reported device as Samsung is now experiencing major issues with the Fold which has caused a delay in its launch.

As for the PlayGalaxy Link, it will probably be set up as a competitor to the Apple Arcade, a gaming service that was recently announced but will be launched in the fall. Let’s see if Samsung will be able to announce its own version before then.