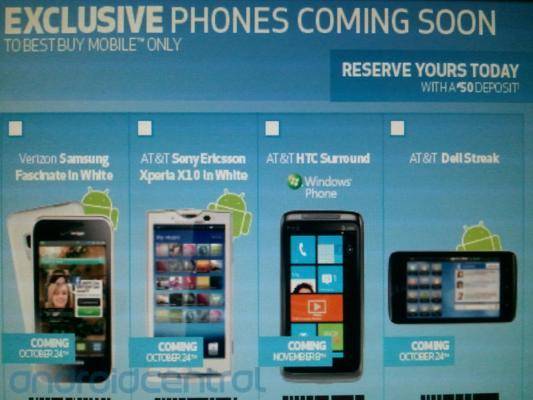 Best Buy’s getting in the mood for a wintery season ahead with the addition of Samsung’s Fascinate and Ericsson’s Xperia X10, both in white. Dell Streak is also coming to Best Buy soon, as all three devices will be available October 24. Best Buy has already begun taking pre orders for all three devices. All you need is $50 and you’ll be added to the list to get your hands on one of these devices in eleven days.

Sources have leaked that Verizon’s Samsung Fascinate and AT&T’s Xperia10 will be getting makeovers for a re-release, exclusively for Best Buy. Fascinate’s back of the phone will be white, while Xperia’s front will be white. Call me crazy, but it seems like both phones would want to match the front appearance to the back, but that’s just me. Dell Streak isn’t getting that same overhaul, but it will be the first time its ever been available at a third-party retailer in the U.S.