Digital natives know that an emoji can paint a thousand words. Okay, not really a thousand, but it can say more than just what you originally meant. Those who have friends using Samsung devices or you yourself if you’re a Samsung user know that the emojis on the devices can sometimes look a little different than the rest of the world. The good news is that the Samsung Experience update for version 9.0 will supposedly fix that emoji problem already.

The rolling eyes emoji is a favorite among those exasperated with other people or the world in general. But the one from Samsung’s emoji line seems to be more amused rather than annoyed. When the update rolls out, it will finally get the actual eye-rolling makeover you deserve. In fact, almost all the facial expression emojis undergo minor revisions to match those that are on other devices, platforms, and apps as well.

Samsung is actually the last major vendor to release an update for their Emoji 5.0 icons, which includes new emojis like star-struck, vomiting face, and crazy eyes with tongue sticking out. You also get the default yellow skin tone for all human emojis, gender-neutral icons for child, adult, and older adult. Some of the face emojis are now forward facing as opposed to the earlier version where they were slightly tilted. Most importantly, the poo icon now has a smiley to go with it because smiling poo is the best. 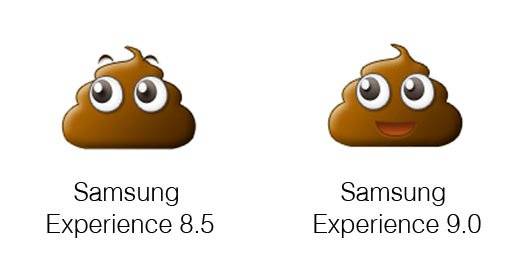 The Samsung Experience 9.0 has started rolling out as part of the Android Oreo update for Galaxy S8 users. Unicode will be releasing new emojis by the second half of the year, so expect those to arrive on your Samsung device by 2019.