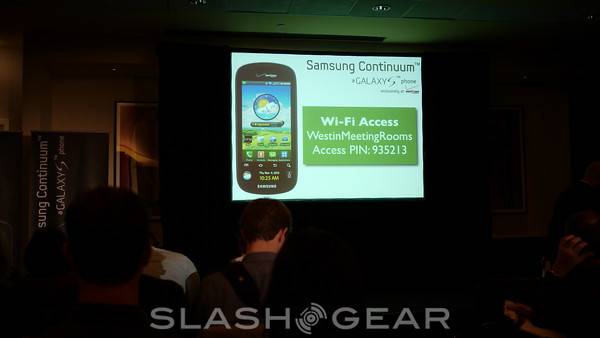 So, Samsung’s event this evening wasn’t everything that some people out there may have wanted, but at least we definitely know the Continuum is coming, and now we’ve got some hands-on time with the device. There’s nothing here that we haven’t heard before: it’s still featuring the 1GHz processor under the hood, and you’ll still get that interesting Ticker 1.8-inch display underneath the main one, where all your notifications will be proudly displayed.

The device features a 3.4-inch capacitive touchscreen Super AMOLED display, and you’re getting Samsung’s proprietary TouchWiz 3.0 User Interface, too. It won’t be launching with Android 2.2, but instead be landing in store shelves on November 11th with Android 2.1 under the hood. There’s 512MB of ROM, and 384MB of RAM, and you’ll get integrated WiFi.

Yes, Microsoft’s Bing is pre-loaded on the device, as well. We’re still waiting for word on pricing, so stay tuned — hopefully Samsung can tell us a bit more. As soon as we find out, we’ll be sure to update accordingly. Our short time with the device was middle-of-the-road. The device works as well as the Samsung Fascinate, which is already available on Verizon’s network for the same price ($199, after a $100 mail in rebate), but the Continuum’s smaller screen was definitely noticeable. Furthermore, the Ticker is a good idea, but it will take some getting used to for anyone who picks up the device. Check out the hands-on images below, and stay tuned for the video.