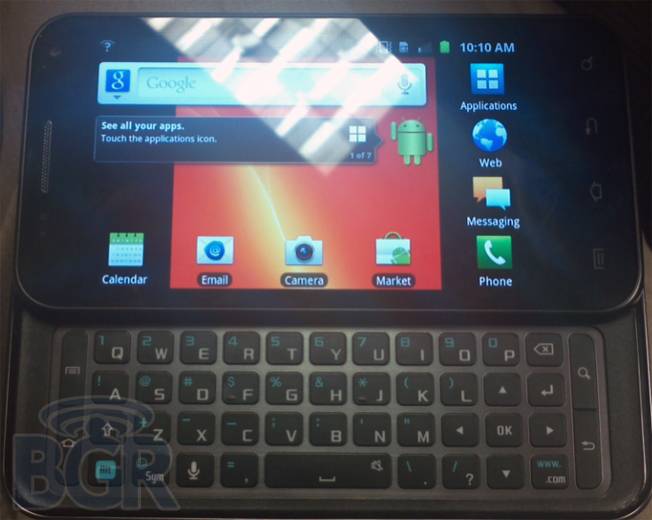 Here’s a photo chaser for all the high-end hardware rumors that have been breaking lately. The phone you see below is the Samsung Captivate Glyde – not to be confused with the Captivate, or, uh, the Glyde. Sources pin this one as a Q1 2012 release for AT&T. Details are scarce, but from the looks of it,  we’ve got a 3.5-4-inch QWERTY slider on our hands. Based on the name alone, this may be an updated AT&T version of the Epic 4G.

The tipster says that the phone has an 8 megapixel camera, and you can easily see a front-facing camera peeking through the glass on the front of the phone. Other than that, we really don’t know anything about the upcoming slider – no processor info, no storage, nothing. From the icons and the general look of the OS we can tell that it’s running Samsung’s Sense UI over what’s probably Gingerbread, but the mismatched wallpaper suggests that this one is indeed a ways off from release.

AT&T could use a solid Android slider phone – the only ones being actively marketed are the decidedly low-end Pantech Crossover and Sharp FX Plus. Technically you could add the XPERIA Play, but as anyone who’s ever played a console RPG knows, entering text on a gamepad is no picnic. We’ll be keeping an eye out for more news on the Samsung Captivate Glyde as the rumored release date gets closer.